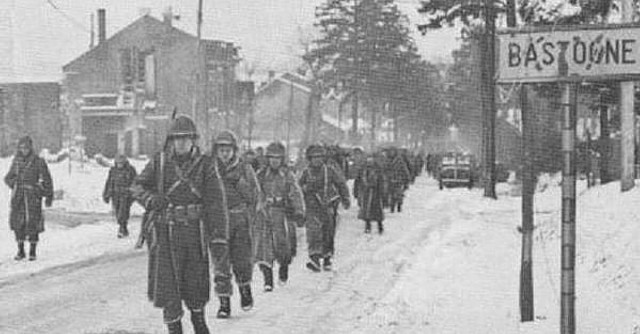 Veteran James Ahrend was a combat engineer with the 101st Airborne Division. Several years ago he went to Washington, D.C. to see the National World War II Memorial – Broken Arrow – for the first time, travelling courtesy of the Oklahoma Honor Flights program.

Ahrend’s childhood was spent on his family’s farm near Sasakwa. It was the Depression Era, and like everyone else at that time the family had very little money. James was drafted in the Army at a young age, and was assigned overseas as a replacement soldier for the 101st Airborne Division, his main task being to build temporary bridges for enabling American forces to continue their progress across Europe.

As a consequence of his role Ahrend often saw battle action. Throughout the war he was involved in four missions across Europe, Normandy, the Rhineland and the Ardennes. Ahrend picked up nicknames wherever he went – he was known to his family as Preston, to his compatriots in the 326th Airborne Engineer Battalion as “Okie”, and as one of the “Battered Bastards of Bastogne” for his role in the iconic stand against German troops that would go down in history books.

In December 1944 Ahrend and his unit arrived in Bastogne to find that the American units guarding the city had been already been virtually defeated, and soon after their arrival the Germans had the city totally surrounded. The conditions were awful; it was the worst weather in Bastogne in a hundred years. “We were so cold we couldn’t think too much,” Ahrend said. Their supplies were dwindling and they were so out-numbered that they had to improvise. “Bastogne was the worst place ever. Even our cooks had to fight,” he said.

Surrounded by Germans and their terrifying “Screaming Mimis” and 88 mm artillery guns, the unit was told by the Germans to either surrender or face total annihilation. Despite this, the Americans maintained their grit. Their commander, Brig. Gen. Anthony McAuliffe, responded with the famous words in response to the German surrender request: “To the German Commander: NUTS!” After a week under siege they were eventually saved by American Army forces directed by Gen. George Patton. But most 101st Airborne veterans don’t see it that way.

Ahrends unit was later endowed with many honors for their bravery and courage in battle, including Holland’s highest honor, the Orange Lanyard, plus two Presidential Unit Citations, the French Croix de Guerre, and the Belgian Fourragere, the Tulsa World reports.

Going to visit the Broken Arrow War Memorial was an opportunity for James Ahrend to contemplate on his experiences in the war. Ultimately, he said that his experiences taught him to be “more thankful for how important life is and how you should live your life”, and how necessary it is to remember. “My favorite words are ‘live, laugh and love.’ But you’ve got to cry, too. If you can’t cry, you can’t let the pressure off.”