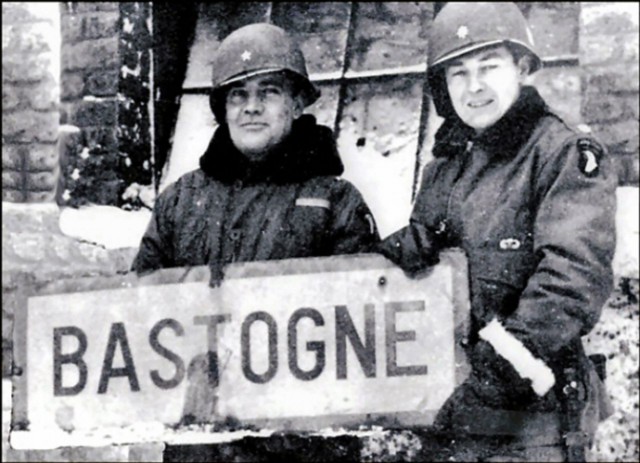 The Ardennes Offensive was a last ditch attempt by the German army to halt the Allied advance across western Europe.  The plan called for a surprise attack and a swiftly moving advance encompassing mechanized forces that would brush aside enemy resistance and which had, as its end goal, the harbor city of Antwerp in Belgium.

The town of Bastogne, straddling as it did the point of convergence of all the main roads upon which the advance of the German armour depended on, was to become the scene of one of the most heroically endured sieges of modern times.

The German army sprung its surprise counterattack upon the Allies at 5.30 am on the morning of the 16th December 1944.  Overly confident and lacking in aerial reconnaissance reports, the Allies were taken completely unawares.

Eisenhower, Supreme Allied Commander, soon realized the importance of Bastogne to the overall success of the German offensive and dispatched the 10th Armoured Division and the 101st Airborne Division to the city. These reinforcements arrived on the 18th December, a mere day before the arrival of the first German units.

When the Panzer Lehr Division reached the city the next day, an assault was immediately launched upon the defenders of Bastogne.  This initial attack was repulsed, and the German forces engaged in an encircling movement that completely enveloped the city, trapping the American troops within a 6-mile enclave.  German reinforcements and material poured into the occupied area.

To all intents and purposes, the defenders at Bastogne were completely isolated, cut off by German forces that now occupied all of the seven roads leading into Bastogne as well as by the foul winter weather that made a tactical relief effort impossible. 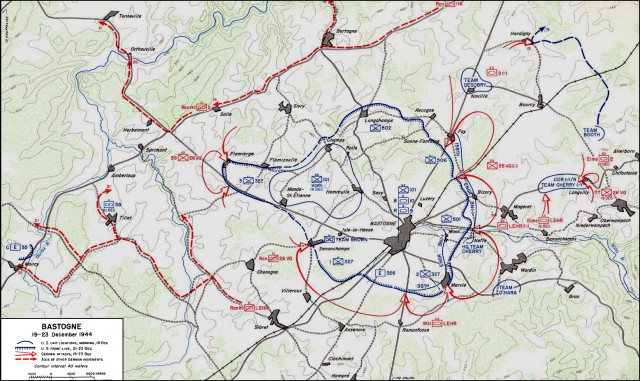 Realising the desperate situation in which the enemy found itself the besieging forces offered an honourable surrender to the American commander, Brigadier General Anthony MaCauliffe, in the hope of sparing American lives.  To their amazement the outnumbered and outgunned McAuliffe responded with a terse “To the German Commander: Nuts.”

Rebuffed by MaCauliffe, the Luftwaffe bombed Bastogne in an attempt to soften up the defense before the main German assault.  The XLVII Panzer Corps then swung into action and advanced upon several key locations.   Eighteen German tanks, supported by infantry, broke through the American defenses and managed to penetrate as far as the American command post at Hemroulle. 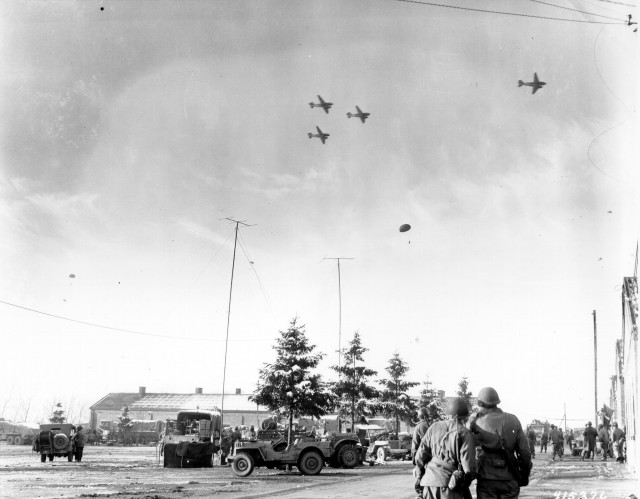 Stiff American resistance prevented German infantry from advancing further, and the panzers split into two columns to effect further penetration.  This proved to be a disastrous maneuver as American tank destroyers, and two companies of the 1st Battalion managed to pick off the German armour piecemeal.

Despite this setback German armour continued to pound Bastogne and waves of infantry assaults were launched on the defenders.  Incredibly, the American defenses held out against the enormous pressure.

With the clearing of the harsh weather conditions, the Allies were now able to drop supplies on Bastogne. The writing was on the wall for the German offensive, and this was further underscored by the arrival in Bastogne of Patton’s Third Army, on the 26th December.

From this point onwards the German siege of Bastogne was effectively over and the Americans were to go on the offensive and destroy all German hopes of driving the Allies back to the sea.

American grit and determination had prevailed against enormous odds, and the unexpected determination had cost the German offensive dearly.  The fighting spirit of the American soldiers that had turned impending defeat into astounding victory may best be summed up by the comment made by Colonel C. Abrams upon hearing that 26 German divisions had encircled Bastogne:

“They’ve got us surrounded again – the poor guys.”