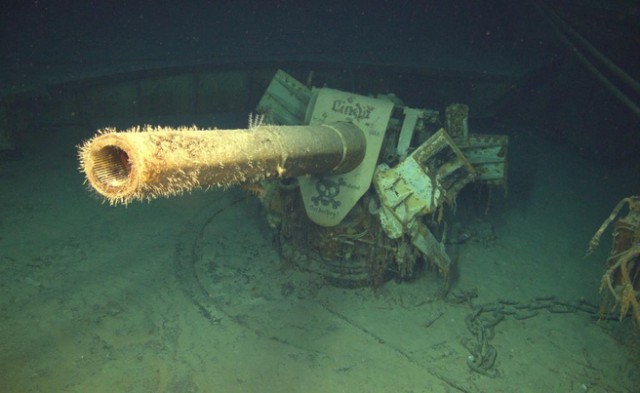 A gun from the Koromoran. Pictures: WA Museum [Via]

Researchers have shed new light on the wreck of the Nazi HSK Kormoran sunk during World War Two by an Australian battleship in 1941.

HSK Kormoran has been lying at the bottom of the Indian Ocean for 74 years when the HMAS Sydney destroyed it off the coast of Western Australia.

Researchers have been analysing the wreckage site using the latest underwater technology. New images from the wreck show the Kormoran’s deadly gun cannon which was known as ‘Linda’ and had a skull and crossbones painted underneath it by the German crew.

Images also include a list from inside the ship which documented all of the ships that the Kormoran had destroyed during its World War Two career. The ships it sunk included both merchant vessels and Allied battleships.

Even though the HMAS Sydney successfully destroyed the Kormoran, the Sydney itself was also sunk in the battle. All of the Sydney’s 645 crew were killed and about 80 crewmen from the Kormoran were killed.

The wrecks have been studied as part of a new initiative by Curtin University and the Western Australia Museum. A team of researchers was sent out to the wrecks of the ships in order to bring back new imagery and find out more about what happened in the battle. They came back with more than three quarters of a million images, the Yahoo News reports.

It has been a huge, time-consuming effort to go through all of the images that were captured, but they are showing the wrecks in new detail that has never been seen before. The team says that it has learnt more about the crew who were on-board as well. During the war it was well-known that guns were given names, but no one has uncovered why the Kormoran’s gun was called Linda.

The first ship that the Kormoran destroyed was a Greek merchant chips called the Antonis at the beginning of 1941 and it went on to destroy 11 more.

Images of the HMAS Sydney show that the ship’s bow was destroyed as well as major damage on other parts of the ship. The research team plans to use the images it has taken to build three dimensional models of both ships that would then be opened as visitor attractions at local museums.