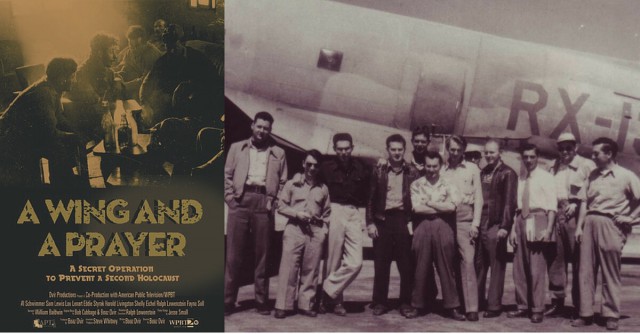 A professor at Penn State University in the U.S. has made a new documentary which uncovers a previously unknown secret operation to prevent a second holocaust.

Boaz Dvir has directed and produced several documentaries on the pilots, aviation experts, and crew who flew thousands of Allied aircraft during the war.

Boaz is a senior lecturer at the university and teaches film, video and journalism. He recently gave a presentation about his latest documentary at the university, during which he discussed the short film called, A Wing and A Prayer. Boaz started to work on the documentary eight years ago.

He says that ever since he began making documentaries, he knew he wanted to research the WWII veteran aviators and make a special film about what they did after the war. According to Boaz, because of their work and actions Allied aircrews literally remapped the Middle East.

Boaz was helped in his research by three Penn State University students, including the president of the Student Film Organization, Patrick Jones. They were all excited to be working on the project since they knew that the film was going to be televised.

The aircrew that the documentary highlights is a group that delivered weapons to the Israeli Army to help it fight back against enemy nations who were attacking the newly created Jewish country.

The group of 25 crewmen worked under the radar of U.S. and international authorities, and evaded capture while still getting weapons and ammunition through to the Israelis.

The aircrew truly believed that if they didn’t help the Israelis protect themselves and fend off the enemy, a second holocaust would occur.

Boaz’s own grandfather had fought for Israel during the war, and it was he who introduced Boaz to the story.

The film has been aired on the U.S. TV station PBS, and has also been shown in more than 150 other countries around the world, the Daily Collegian reports.

When Boaz gave his presentation at the university he introduced a panel of experts who answered questions from the students. Boaz was and still is keen for the younger generation to see his film and engage with the topic so that they understand what happened there.