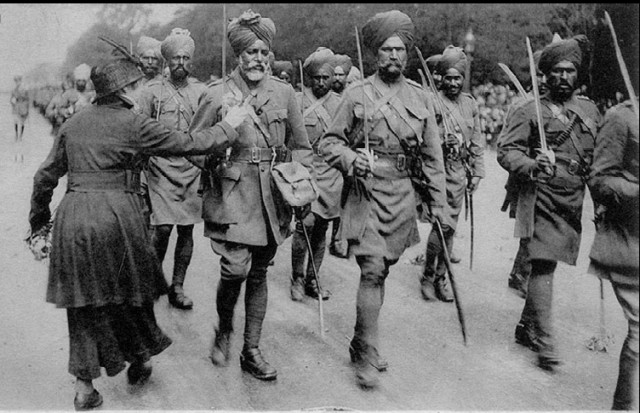 The role of Indian soldiers who took part in World War One has been commemorated in a new book called For King and Another Country: Indian Soldiers on the Western Front 1914-18.

Around 1.5 million Indians fought for the Allied forces during World War One. One of these was called Sukha; he volunteered to join the army when they called for Indian recruits to join the fight for the British King and Emperor in 1914.

Sukha made the journey to Europe and fight against the Germans, but never returned to his homeland of India, just like thousands of others who gave their lives for the war.  Sukha was from one of the lowest castes in Indian society and was known as an ‘untouchable’. This caste was thought of as so menial that the members were known only by their first names, as surnames were not deemed necessary. They were charged with performing only very basic duties such as cooking and emptying bed pans for higher-ranking officers.

Sukha’s story is outlined in the new book and sadly tells of how he died in 1915 of pneumonia in a British military hospital. None of his comrades would accept his body for burial because of his caste.

Finally, the vicar of the local church in Brockenhurst provided a gravesite for him. Sukha’s headstone was paid for by local parishioners who all gave thanks for his actions. His stone is a dedication to his sacrifice for others.

Sukha’s story is a difficult one that reveals the reality of India’s caste system during World War One and continuing today. It is also a reminder and commemoration of all those soldiers from other countries who fought for the British empire.

The new book is written by Shrabani Basu and details several personal accounts of soldiers during the First World War from Hindu, Sikh and Muslim backgrounds, both from India and Pakistan. Unfortunately, few are memorialised, since there is no annual commemoration such as Remembrance Day in the UK or Anzac Day in Australia.

Many historians believe that the role of all soldiers from the Commonwealth should become part of the school curriculum so that future generations learn about their part in the war.

At the end of the war, 11 Victoria Crosses has been awarded to soldiers from Asia, including the first for a British Indian Army soldier – Khudadad Khan. Khudadad was a machine gunner with the 129th Baluchi Regiment.