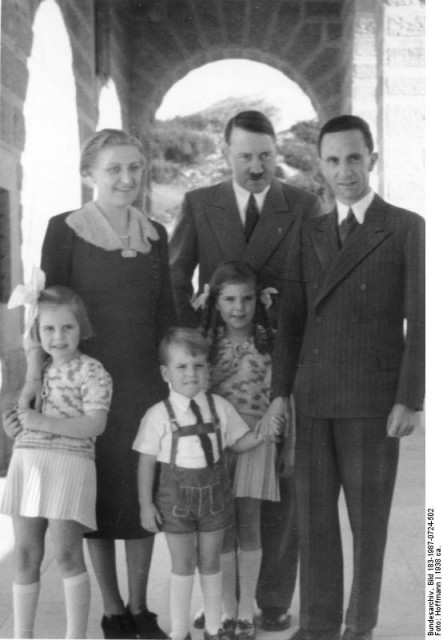 A new biography of Dr Joseph Goebbels has been written and published by historian Peter Longerich. Goebbels was Adolf Hitler’s propaganda chief and number two, famously committing suicide with his wife and six children straight after Hitler and Eva Braun in April 1945.

Longerich has also previously published a biography of Heinrich Himmler, another of Hitler’s top Nazi party chiefs. In his Goebbels biography, Longerich has taken newly available materials from Goebbels original diaries. He kept diaries from 1923 right through to before he committed suicide in 1945. The diaries were only previously available in excerpts, since they were taken by Soviet troops at the end of the way and kept in top secret archives. However in 2008 the entire Goebbels diaries were made available to the public.

Goebbels was born in 1897 into a catholic family in Rhineland. His family was poor and growing up with a club foot meant that Goebbels focused more on his academic studies than physical pursuits and was not allowed to join the German army during World War One.

As a fiction writer, Goebbels made little money and lived at home with his parents until he founded the local branch of the National Socialist German Workers’ Party in 1924. He held deep-set views against Jews but had not considered joining the Nazi party until it started to become more popular. Then Goebbels used his talent with words to begin carving the party’s messages and what was to become the now infamous Nazi propaganda.

Working his way up the party’s ranks, Goebbels became noticed by the party leaders including Hitler. He became a leader that would unite the party and he prevented divisions to take hold. Hitler ordered Goebbels to become the regional Nazi party leader in Berlin, ensuring that the party continued to gain ground during the early years, The Irish Times reports.

When Hitler and the Nazis finally took power in 1933, Goebbels was given the role of propaganda minister which he held throughout the rest of his life. Goebbels showed unwavering loyalty to Hitler and always wanted to please him and seek his approval. Hitler was aware of this and even influenced Goebbels on his decision to remain married to his wife Magda, after he had several affairs with other women.

Goebbels, the biography by Peter Longerich was released in June 2015 and is available to buy now.