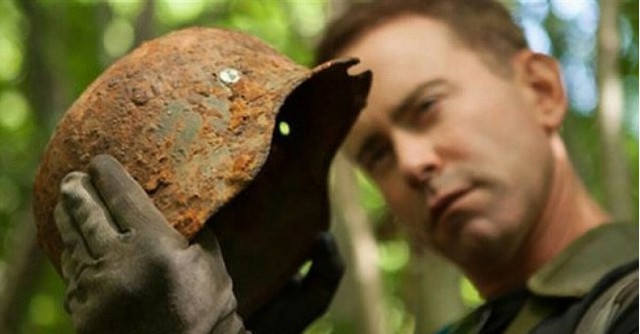 In March 2014, National Geographic announced that it would not be broadcasting a controversial series of four one-hour documentary films, entitled “Nazi War Diggers”. Due to air in the Spring of 2014, the programme, which was made by ClearStory, a UK production company, followed the work of a team consisting of a Polish artefact collector and an American military memorabilia dealer.

Nazi War Diggers, which was also pulled from its schedule by Foxtel in Australia in 2015, consists of four one-hour episodes during which the excavation team traces, exposes, and recovers the remains of Russian and German soldiers killed in action. In addition, hundreds of Second World War artefacts are gathered.

National Geographic’s decision followed a vigorous campaign by many archaeologists and military historians, who said that the films were distasteful, and portrayed a lack of respect for those who died in combat situations.

A trailer video on National Geographic’s website contained footage of human remains being pulled from a grave in Latvia – a scene that, according to the director of the Centre for Battlefield Archaeology at Glasgow University, “comes across as ghoulish”. Dr Tony Pollard was one of the eminent archaeologists who campaigned for the series to be scrapped.

ClearStory says that the excavated remains and the military memorabilia are passed to the relevant authorities for safe keeping, and so that the remains of the dead soldiers can be ‘buried with honour’.

The company claims that it was in close contact with the Latvian War Museum during filming for the series, but the Museum has apparently denied that it supported the making of the programme. The German War Graves Commission also expressed concerns about the way the programme was made.

Following National Geographic’s decision to abandon its proposed broadcast, the series went to air on the Discovery Channel in Poland when, according to ClearStory, its weekend viewing slot audience rose by 87%.

In a controversial move, the British Channel 5 TV company has decided to screen the series, now renamed ‘Battlefield Recovery’.

The first episode of Battlefield recovery has already been broadcasted by Channel 5 and they promote it as:

“WWII history series following a four-man team as they explore the war zones of the Eastern Front in an effort to excavate and preserve the forgotten battle relics, at the same time discovering the stories of fallen soldiers from their remains.”

Critics have slammed the decision, accusing the channel of endorsing grave-robbing. The archaeological world has also condemned the decision, with leading figures referring to a publicity photo of the excavation team with an unearthed human skeleton as ‘hugely distasteful’.