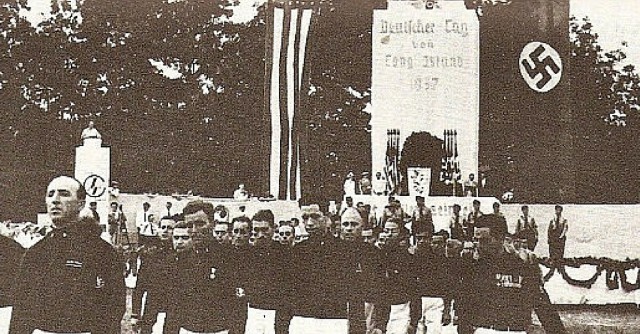 The menace of neo-Nazism in North America is not as modern phenomena as many may think, with the rise of Hitler in Germany the echoes of Nazism could be heard in the streets of almost all the English speaking world including United States.

The train would arrive on Yaphank station packed with white enthusiastic Americans, on the platform they would be greeted by bunch of young adults, neatly uniformed and bearing Swastika on their arms. To many this may come as a shocking surprise but a small community of New York’s Long Island, held the meetings in the 30’s for Nazi sympathizers gathered from all over the NY state.

The attendees would then engage in a number of ‘pro-Nazi’ activities including listening to lectures littered with Nazi propaganda. Listeners were told about the significance of eugenics and the menace of ‘Jewish control’ over Aryan race. The events were organized by GASL (German-American Settlement League) an offshoot of infamous German-American Bund, a quasi-military group setup to promote Nazism across United States. Although the organizers made sure no one carried weapons during the ‘festivities’, however some elite members did undergo rifle training under American rifle association’s membership.

In the wake of the Second World War, US government quickly seized the land denying the German American Settlement League any right of ownership over Camp Siegfried (now called Siegfried Park). However in a matter of few years, GASL wrestled its way back in and gained the complete control over the Park. After the end of war, GASL went to all lengths possible, to show the authorities that their ties with any kind of Nazi ideology has been severed and that the organization is purely working for the welfare of German-Americans. However the struggle of a Siegfried local couple has brought the activities of this historically ‘fascist’ organization back to public eye.

Philip Kneer and Patricia Flynn-Kneer are fighting a court battle against GASL and its affiliates on the basis that the organization is still secretly pursuing the same Nazi agenda of white supremacy and has lied to the authorities for decades.

When couple decided to buy a house together in the late 90’s, they came across a two bed bungalow in the housing society owned by GASL. Desperate for a house, Kneers got a fair bargain and bought the house for $70,000, a really good price for a nice secluded bungalow in a quiet area. Kneers were really excited for their new house, so they overlooked the elaborate checks GASL put them through in order to prove their German ancestry. People from the organization held detailed interviews, and even went to Germany to make sure Kneers have German blood in them.

But this was not the end of their ordeal; rather it was the start of a new experience for the couple, one that they never thought they would ever experience in United States. After moving into their new house, they found out that unknowingly they were sucked into a community which is meticulously controlled by a fascist white superamist organization. Kneers revealed in their court documents that GASL would never allow non-whites to buy any of their houses in the community, and prides in keeping the community ‘completely white’. Kneer family also put forward a number of other evidences supporting their claim that GASL is a racist and fascist organization, which is purely working on promoting the Aryan culture while stubbornly denying non-whites or non-Germans the right to buy a house on their lands, the Mail Online reports.

GASL hit back by denying all the allegations as fabrications concocted by the Kneers to damage GASL’s reputation out of their personal grudge against the organization. Robert Kessler, the President of the League maintains that Kneers are simply bitter due to the fact that they did not get their ‘expected’ price on the house, and now taking out their anger on the League. He admitted that to some of the outsiders League may seem as a strict organization, but denied any sort of racist agenda as proposed by the Kneers.

Regardless of the outcome, the Kneers case reminds many Americans of the long forgotten history, which is still alive and kicking in some secluded parts of the ‘new world’ and needs special attention from the authorities.