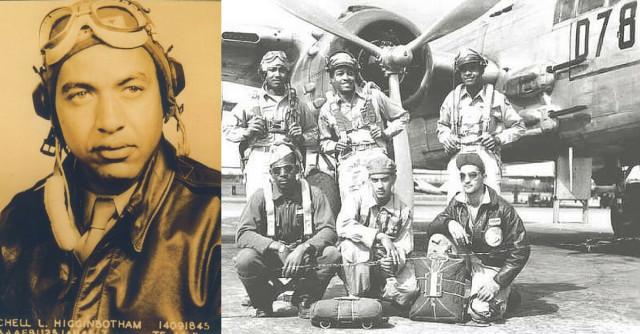 “Mitch was a true patriot, who against tremendous adversity and prejudice would not wavier from his allegiance to the United States and his goal to be an aviator,” The Palm Springs Air Museum’s managing director Fred Bell said. “His life and dedication should serve as an example of what one should do for their fellow men and our nation. It is one thing to espouse patriotism. It is a very different thing to strive with your all your body and soul will give – and Mitch did just that. We are lucky that these type of men stepped up to the plate during a very dark time and I am truly blessed to have known him.”

This is a fitting tribute to a brave and principled man, Mitchell L. Higginbotham, who passed away at Rancho Mirage on Sunday 14th February 2016 at age 94. Mitchell was born on the 2nd March 1921 in Amherst, Virginia and he answered the call to duty in World War II, enlisting in 1942.

Mitchell was one of the Tuskegee Airmen, a squadron of African-American pilots who gained accolades for their bravery and flying skills during the war. The squadron won renown in the Italian campaign. They were originally only intended to engage in escort duties, but soon they were involved in dogfights with the Luftwaffe.

Mitchell was trained as part of class 44-K-TE at Tuskegee Army Airfield and graduated with is wings as a 2nd Lieutenant on the 1st February 1945. Following his graduation from flying school he was posted to the 477th Bombardment Group based at Freeman field in Indiana, where he was trained on single and multi-engine aircraft and was cited for his skill in piloting the B-25 bomber.

In mid-1945 Mitchell, along with many of his colleagues were involved in an attempt to desegregate the officer’s club at Freeman field; an incident called the Freeman Field Mutiny. The segregation of the armed forces during World War II was strictly enforced. This enforced segregation was carried through to the officer’s social clubs in spite of Army Regulation 210-10, Paragraph 19, which prohibited any public building on a military installation from being used “for the accommodation of any self-constituted special or exclusive group.” This regulation required the officer’s club to be open to all races, but this was not implemented at Freeman Field. Here the colonel in charge of the field had instituted two clubs, a trainees club for use by black officers and an instructors club for the exclusive use white officers.

This infuriated the airmen of the 477th and it all came to a head on 5th and 6th April when a total of 61 black officers were arrested for attempting to gain entrance to the instructors club. After an investigation 58 were released and the colonel redrafted the rules around the clubs. These new regulations were read out to all the airmen and they were instructed to sign a copy but they refused. Eventually 101 airmen were arrested for refusing to sign the new regulations. On 23rd April, they were all released after pressure was brought to bear on the army by many different pressure groups.

This incident is often quoted as a turning point in efforts to fully integrate the armed forces and the men that stood up for their ideals were eventually fully pardoned by President George Bush. Mitchell, along with 300 fellow Tuskegee comrades were awarded the Congressional Gold Medal.

After being demobbed Mitchell went to the University of Colorado, where he graduated with a Masters Degree in Labor relations. He held several positions ending up as a probation officer in Los Angeles County.

In recognition of all that he had achieved for the Tuskegee Airmen, he was awarded the highest honour by his old comrades and made their Man of the Year in 1996.

Two years ago he moved to Rancho Mirage to be closer to his family and he took the time to teach young children the history of the great squadron nicknamed the Tuskegee Airmen. He had a great affection for children and spent a great deal of his time with them. He also acted as a consultant on the film ‘Red Tails’ about the Tuskegee Airmen.

Services for this principled, peace loving and moral man will be held at noon on the 5th March at the Tolerance Education Centre, 35147 Landy Lane, Rancho Mirage and Mitchell will be buried at the Tuskegee Memorial in the Sewickley Cemetery.

A formal Tuskegee Memorial Service will be held in May.