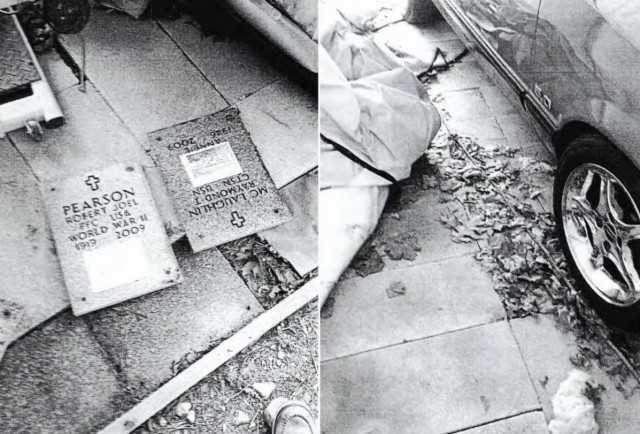 A military cemetery worker from Rhode Island in New York is being investigated for stealing over 150 war veterans’ headstones.

The headstones have been found at the home of Kevin Maynard who used to work at the VA cemetery in Rhode Island. He has used the large granite blocks to lay the floor of his carport outside his house. Many of the headstones still have the inscriptions of the soldiers’ names.

The cemetery manages the headstones by replacing them with new ones if and when they become cracked or their inscriptions fade. The government’s Department of Veterans Affairs will then replace the damaged headstones with new ones and the old ones are removed and sensitively disposed of.

An investigation began when old headstones were mysteriously going missing. Investigators visited Maynard’s house in Charlestown, Rhode Island and came across the headstones lying in the ground to create the foundations of two carports outside his house. The covering was made from metal poles and plastic roofing. One truck was parked in the carport, and other headstones were found lying around the property.

After consulting with legal advisers, Kevin Maynard, who is 59 years old, is going to plead guilty to the charge of stealing the veterans’ headstones, as well as other items from the cemetery.

Investigators believe that Maynard had taken the headstones over a long period of time starting around six years ago.

Maynard was charged in court this week and sentencing is due to occur later this summer. It is thought that he will serve a year of probation and serve 500 hours of community service.

Maynard was investigated after authorities were tipped off by two other workers from the cemetery. They told investigators that Maynard had bragged about taking the headstones and how he was using them at his home. One of the workers had even visited Maynard’s house and seen the headstones forming the foundation of his carport, The Washington Post reports.

After being investigated, Maynard voluntarily left his job at the cemetery after nine years in the job. He told investigators that it was his job to remove the old headstones and transport them to the official facility that would crush the granite before the new headstones arrived. It was as part of this job that he would not deliver all of the old headstones and would instead take them home.