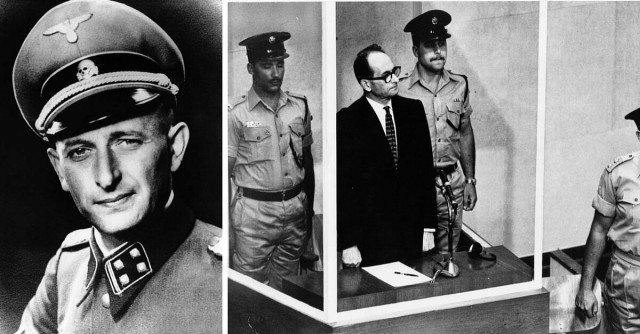 Hollywood has some big war movies coming up in the next year or two. One of those movies will be about the capture of the notorious  Nazi, Adolf Eichmann. Throughout the war, he was known as the mastermind of the Holocaust. MGM Studios plans on making a movie on this Nazi and his capture and they are expected it to be a gripping thriller.

The script is still a work in progress, being written by British screenwriter Matthew Orton. The movie will be about how a team hunted down and captured Eichmann. The producers will be Brian Kavanaugh-Jones and Automatik. Matt Charman will be the executive producer.

When someone thinks of the Holocaust, they immediately picture Adolf Hitler, who was the instigator of the entire horror. However, many do not think about who ran the concentration camps and who helped capture the Jewish victims of the Nazi terror. There were many Nazis who were responsible for the torture and murder of these poor people.

One of those Nazis was Eichmann, who was one of the top organizers of the entire operation known as the ‘Final Solution.’ He arranged all of the transportation of the Jews to concentration camps. Eichmann could be considered one of the chief instigators responsible for the killing of millions of Jews in the Holocaust.

After the war, fearing that he would be hanged for his crimes, he fled Austria and moved to Argentina. With the help of the Israeli Intelligence Agency Mossad, the area where Eichmann was laying low in the 1960s was pinpointed in the Argentinian capital. Teams of Mossad and Shin Bet agents organized a raid, capturing Eichmann and taking him to Israel to face his crimes. He was found guilty, sentenced to hang, and was executed in 1962. It is said he never apologized for his crimes and had never intended to do so.

The untitled film about his war crimes will take place from the time Eichmann’s activities were at their peak in war-torn Europe to his final moments before being hanged in Jerusalem.

Eichmann was born on March 19, 1906 near Cologne, Germany to a Protestant family. He moved to Austria after his mother died. He grew up in Linz, Austria, which had also been Hitler’s hometown. Oddly enough, while growing up Eichmann was teased constantly for his darker complexion and was actually called “the little Jew.”

After failing college due to the fact he couldn’t complete his engineering courses, he took several odd jobs. He worked for a while as a laborer in his father’s mining company, at an electrical construction company, and even as a salesman.

By 1932, he was 26 years old and joined the Austrian Nazi Party after a friend, Ernst Kaltenbrunner, suggested it. Eichmann then became a member of the SS, and by 1934 he was serving as an SS corporal at the Dachau concentration camp. Afterwards, he got a job in Heydrich’s SD, a security company, as a filing clerk. He first started filing information on Freemasons and soon started filing information about all Jews. This was when the Jewish situation caught his interest.

He became somewhat obsessed with it, and soon was studying all Jewish culture, attending Jewish meetings, and even visiting large Jewish cities. He took notes on it all, and even studied the Jewish language to the point where he could understand and speak Yiddish.

Once the Nazis took over Austria in March 1938, Eichmann was sent to Vienna to take control of the Central Office for Jewish Emigration. The office issued permits to Jews who wanted to leave Austria, looking for a safe passage. Eichmann managed to have over 100,000 Austrian Jews leave, at first not knowing that he was turning them over to concentration camps.

Eventually this man’s  dedication to persecuting Jews, resulted in him being appointed to the role of administrator for Hitler’s Final Solution – capturing, deporting, and destroying every Jew he could find, and causing unimaginable terrors to the Jewish people under his control, without conscience and without regret.

Eichmann was truly evil even by the standards of the Nazis. The movie about his life will be a portrait of evil.