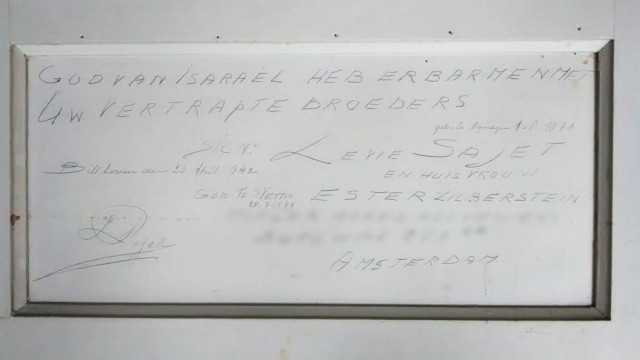 A message from Jews in hiding written on a door during World War Two has been uncovered by workmen in the Netherlands.

Jelle Kapitein who is a workman from the Netherlands was undertaking renovations on a house in the village of Bilthoven, near Utrecht, when he discovered the writing.

Jelle and a colleague were unscrewing wood panels that had been placed on the house’s bathroom door. When they removed the panelling the bathroom door underneath and scrawled writing on it. They immediately assumed that the message must have been left by a Jewish couple who were in hiding during the war.

Jelle said that is was a complete surprise to find the message, and that he and his colleagues were completely moved by the message since it was so sad and helpless.

Look on the roof and find my last personal things and try after the war to find family of ours
Give them my things and you will become something
Oh God of Israel, have mercy on your humiliated brothers
Signed, Levie Sajet born at 1-8-1881 born in Nijmegen and his housewife Ester Zilberstein born at
Stettin on the 28-7-1899

An Amsterdam address was also included in the message, and it is thought that it must have been the couple’s original home in the capital city, but they had come to Bilthoven to hide from the Nazis.

Jelle is now trying to research and find out if Levie and Ester have living relatives. He is also eager to discover what happened to the couple during the war.

The renovations were due to remove the bathroom door, so Jelle has taken the door and kept it and may give it to the Yad Vashem Museum so that it can be preserved.

The museum is helping Jelle identify and search for Levie and Ester, by looking through their archives. To date no one has been able to verify their identities, the ABC News reports.

Yad Vashem Museum is eager to take possession of the door so that it can be kept as evidence of the plight of Dutch Jewish people during the war.