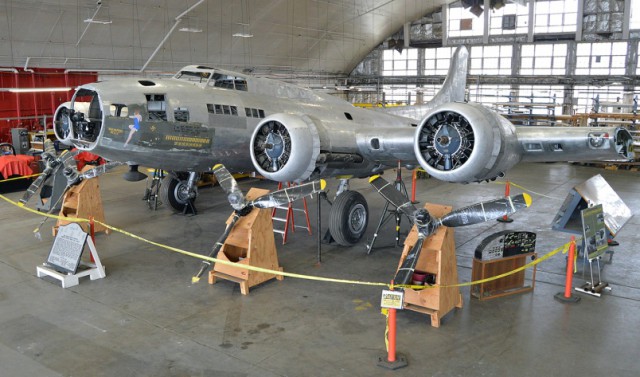 The famous Memphis Belle, a B-17 World War Two bomber, is undergoing a major restoration project at the National Museum of the United States Air Force.

The Memphis Belle was kept in Memphis, Tennessee for around 60 years before being transported to the museum in Dayton, Ohio for restoration.  This work on the historic bomber began ten years ago, and it’s expected to take another two and a half years before it will be completed.

Memphis Belle is considered one of the five most important aircraft in U.S. History, the others being the Wright Brothers’ Flyer, the Spirit of St Louis, the Enola Gay, and the X-1 rocket plane.

After the war, the Memphis Belle was saved from reclamation at Altus Air Force Base, Oklahoma where she had been consigned since 1 August 1945, by the efforts of the mayor of Memphis, Walter Chandler, and the city bought the B-17 for $350.

She was flown to Memphis in July 1946 and stored until the summer of 1949 when she was placed on display at the National Guard armory near the city’s fairgrounds. She sat out-of-doors into the 1980s, slowly deteriorating due to weather and vandalism. Souvenir hunters removed almost all of the interior components.

Eventually no instruments were left in the cockpit, and virtually every removable piece of the aircraft’s interior had been scavenged, often severing the aircraft’s wiring and control cables in the process.

The Memphis Belle Memorial Association says that while the plane was in Memphis, the key focus was on preventing damage and maintaining the aircraft.

It was stored outside over its 60 years in Memphis, yet the damage is surprisingly minimal. However, the Memphis Belle will never be in flying condition again, even after the extensive renovations have been completed. Tthe Stars and Stripes reports.

The Air Force museum is financing the project and manning a team of around 16 full-time employees and a group of around 40 volunteers. Other aircraft also being renovated at the museum include a Titan IV rocket, a C-82 and a C-119 along with a variety of other World War Two vehicles and equipment.

Memphis Belle was named after Margaret Polk, fiancée of her pilot, Robert Morgan. Both were from the city of Memphis. During the war, the bomber completed 25 missions over Europe.