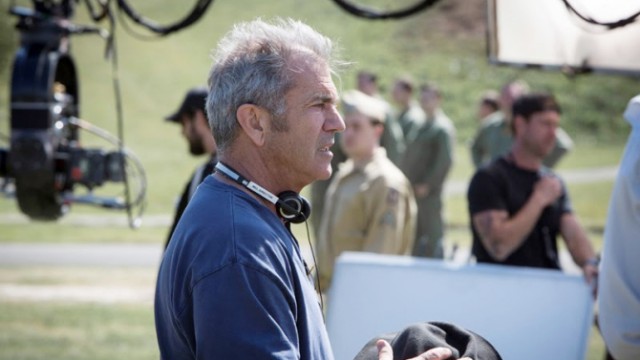 Mel Gibson was photographed overlooking the principal photography for his upcoming creative venture; a Second World War drama called Hacksaw Ridge. It has been a while since Mel Gibson took part in any Hollywood major production; with him back in the arena fans are expecting a decent production and a realistic war movie.

Surrounded by members of his production crew, Mel Gibson seemed pretty determined and focused while directing some action sequences for his upcoming movie. His direction looked quiet intense, he was constantly moving around, directing and making people doing adjustments to his elaborate outdoor set; a rain soaked field just outside Sydney. Even in between occasional breaks, Mel Gibson discussed various possible sequences with his senior Production team.

A large number of ‘old jeeps’, army wagons, and tanks could be seen surrounding the wet field waiting for their turns to perform on Gibson’s orders. An elaborate effort was carried out to add utmost authenticity to the military gear and uniforms as well as soldiers’ tents that were erected in the nearby patch of dry land. Despite the less then favorable weather conditions on ground, actors and extras performing as soldiers carrying Second World War Weaponry such as flame thrower and machine guns, looked ready and determined to make things work for the day.

This is not the first time that Mel Gibson took the director’s seat to showcase his creative skills. Hacksaw Ridge is going to be his fifth directorial project after The Man Without A Face, Braveheart, The Passion of the Christ, and Apocalypto. Nearly all of above mentioned projects generated handsome revenue and earned critic’s appreciation and audience’s approval on a wide scale.

Gibson is not a stranger to New South Wales, since he spent most of his childhood in the region. While addressing the reporters and journalists in Sydney’s Fox Studios, Mel Gibson expressed his gratitude and excitement about his current project being filmed near Sydney. He talked about the people he bumped into after a long time, and that working with his past friends gave him a unique sense of satisfaction and confidence, the Mail Online reports.

The subject of the movie is a unique mostly ‘under-mentioned’ hero of the Second World War. Starring Andrew Garfield of The Amazing Spider man, Hacksaw Ridge tells the story of Conscientious objector Desmond Doss, who saved the lives of more then 75 men on Okinawa Island during the Pacific theatre of the Second World War. The man never fired a shot, and saving lives of that many soldiers is certainly a good subject of a blockbuster war movie.