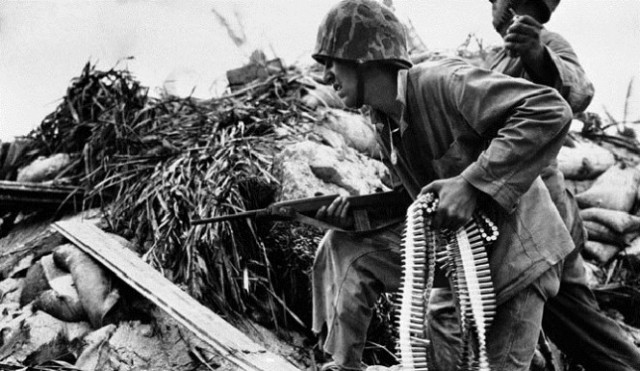 The remains of 36 World War Two US Marines have been uncovered on the Pacific island of Kiribati.

The bodies of the soldiers have been discovered by a US charity called History Flight that is operating in the Pacific to recover and return as many World War Two soldiers’ remains as possible.

One of the bodies they have found is that of Alexander ‘Sandy’ Bonnyman on Tarawa Atoll island who received the Congressional Medal of Honour.

The charity uses archival documents and records from the US military plus original burial documents, radar and local investigations to find war graves. History Flight has been operating in the Pacific since 2007.

The find of 36 US Marines on Kiribati is the biggest find they have come across so far, all of which will be identified and returned home to the US for full military funerals.

History Flight director Mark Noah said a combination of archival research of original burial records, radar searches, and interviews with locals had turned up a number of graves since 2007.

Kiribati Island does have a US war cemetery for those who died during the conflict, but many were buried in mass graves near the battle ground and were never identified or formally documented.

The charity says that it wishes to uphold the expectation for all soldiers that no matter where they were killed, they would be repatriated and buried on home soil, the ABC News reports.

The war grave of the 36 marines was discovered after four months of excavation work in the area. So far 18 have been identified and the remainder are still being analysed. The charity says that Lieutenant Bonnyman’s teeth and dental records meant that they were able to identify the Medal of Honour recipient, The Morning Call reports.

Bonnyman received the honour post-humously for his bravery after he led many assaults on the island. He was killed leading an advance on a Japanese strong-hold of 150 men.

A US Marine photographer captured the moments when the attack took place and the film won an Academy Award in 1945.