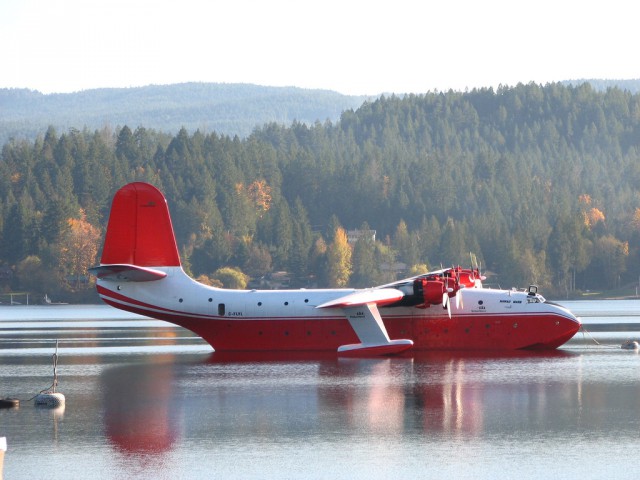 A World War Two era Martin Mars water bomber airplane that was put out of service in Canada is said to be being brought back into service in order to tackle wild fires in the Canadian bush.

The water bomber is the last remaining aircraft of its kind and was put out of service two years ago.

Wild fires in the Alberta region of British Columbia are an annual occurrence but authorities are struggling to keep them under control.

The red and white Martin Mars aircraft is noticeable both on the ground and in the sky and now the regional government in British Columbia has decided to allow the water bomber to fly again.

The aircraft’s owner, the Coulson Group, has been in discussions with the authorities about bringing the bomber back into service. It wasn’t until about one week ago that the government was convinced that it needed the water bomber in its fleet, as wild fires worsen and spread in the region.

The Coulson Group also supplies other aircraft and firefighting services to the regional government, so the Martin Mars will be added to the group.

The Martin Mars water bomber was originally built during World War Two and served in the US Navy. So even though it is more than 70 years old, the bomber is an iconic aircraft that still manages to serve its purpose in a non-military setting.

The regional government has been hesitant about taking on the aircraft again since it is expensive to run and maintain and is only usable in specific situations.

Since the plane was decommissioned from use in 2013 it has been stored at a small aircraft hangar near Port Alberni.

The wild fires have gradually gotten worse as the summer heat gets even hotter. The fires have gotten close to the lake where the aircraft is actually stored, and so it was in the company’s own interest to get her flying again and help limit the spread of the fires, the CBC News reports.