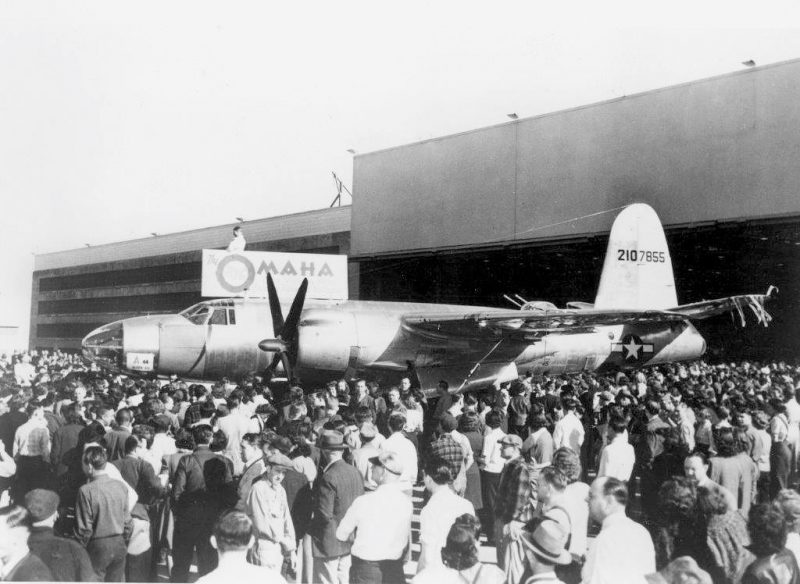 By April 1944, more than 1500 B-26 bombers had passed through the production lines of the Martin Bomber Plant in Bellevue, Nebraska.

The very next day the plant began to produce B-29s as demand soared as World War Two came to a climax in both Europe and Pacific. The plant would go on to make around 500 of the bombers.  Many of the 14,000 employees during the war were women, since most working-age men had been deployed overseas. The plant even encouraged women to join it by advertising the likeness between sewing and riveting.

It was the women of the Martin Bomber Plant who produced the Enola Gay and the Bockscar, which dropped the atomic bombs onto Hiroshima and Nagasaki respectively. Japan surrendered not long after.

One of those female workers was Kathryn Narmi, who was 19 at the time. Kathryn is one of only a few of the surviving women who worked in the plant.  She started to work at the plant in 1942 and when she laid eyes on the huge factory spanning 12 acres, she was not sure how she would get on with the work. The factory had to be large so that it could accommodate the production of one of the world’s largest bombers.

70 years later and Kathryn has been recalling her time at the plant. She said that the factory floor must have been the size of three football fields and all that she could feel was scared.

Sadly, however, the plant might by closing its doors for the last time. The building belongs to the US Air Force, and the 55th Wing Division is planning to have the site demolished in order to cut costs by reducing the number of buildings on the base. There is also a safety element to the proposed demolition, since the huge production factory building is located right next to the base’s runway, and does not comply with today’s safety regulations.

Locals and architects view the demolition as a shame, since the factory was so vital to the Allies’ war effort and the building was a cutting-edge example of engineering and architecture for its time, the Omaha.com reports.

Once the war ended the building was renovated into smaller sections so that it could be used for different purposes including a laboratory, a recreation area for troops and a storage unit for military vehicles. The Martin Bomber Plant in Bellevue is one of four plants built by the Martin Company in the US during the war in order to meet demand for aircraft.