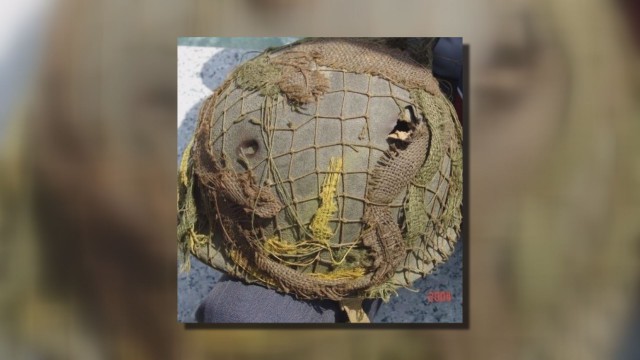 The familiar olive coloured M1 steel helmet was first issued to US troops in 1941, and by 1942 all troops had them. The helmet was worn by American soldiers all over the world throughout the Second World War and in the Korean and Vietnam wars.

Simple to look, at the M1, had more to it than meets the eye. The helmet, which was designed by the US Army research team at Fort Benning was a two-piece construction. It had an outer shell of Hadfield manganese steel and an inner liner which incorporated a suspension system.

Hadfield manganese steel is ‘work hardening’, which means it gets stronger on impact or when compression is applied. It is also non-magnetic. As the steel surface wears, it becomes stronger and stronger, while retaining its ductile qualities – it’s the ideal material for a helmet that may be subjected to sudden shocks or high-energy impact.

The M1 weighed one pound and served a variety of purposes apart from its intended one. Helmets were used for boiling water, digging trenches, as washing and shaving basins, emergency toilets, and as a last resort, as bludgeoning weapons.

Cooking in the helmets was discouraged because repeated heating and cooling cycles could make the steel brittle, and liable to shatter when impacted. Nets could be added to helmets so that camouflage materials, such as leaves and twigs could be inserted.

By the end of the Second Word War, over 22 million of these helmets had been made. A further one million were manufactured in 1966-1967 for use in the Vietnam war.

US soldier Joseph Kirton Barrineau, known as ‘JK’, took part in the Allied D-Day landings on the beaches of Normandy. The troops were subject to heavy fire from German machine gunners, and although he was wounded that day, Joseph had special cause to be thankful that he was wearing his M1 helmet.

It wasn’t until after the landing when he was being treated by army medical staff that Joseph realised his helmet had stopped an enemy bullet. Without the M1’s protection, he would have become one of the 2500 American soldiers killed that day.

After the war, Joseph became a Pastor and spent the rest of his life serving his community. He died, aged 88 on June 3rd, 2011 in Knox County, Kentucky.

Joseph’s wife still has that lucky M1 helmet, and on 4th January 2016, she and other family members proudly attended a special ceremony at the National WWII Museum in New Orleans, when Joseph’s helmet was added to the items on display.