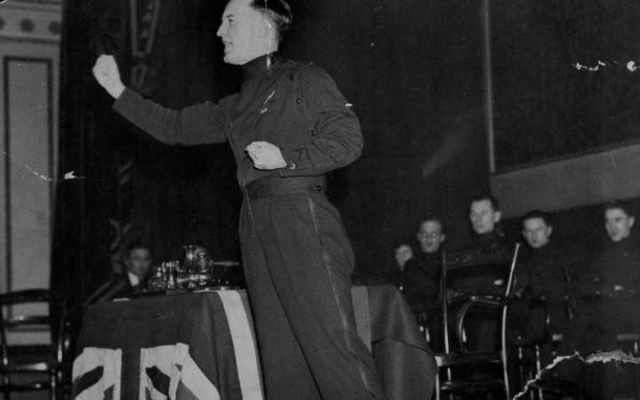 William Brooks Joyce was born in Brooklyn, New York on 27th April 1906. His father was an Irish Catholic, who had become a US citizen, and his mother was an Anglican.

Shortly after the William’s birth, the family returned to Ireland. Between 1915 and 1921, Joyce attended college in Galway, and in 1921 he went to England, where he continued his studies at Kings College school, just outside London.

On leaving the school, Joyce applied to the University of London, graduating with a first class honours degree.

While at university, Joyce developed an interest in Fascist politics, and by 1932, he was an active member of Sir Oswald Mosley’s British Union of Fascists. His power of oratory quickly made him a leading speaker for the cause, and in 1934, he was made Director of propaganda and, later, Deputy leader of the Union.

Known for his tendency for engaging in physically violent confrontation with dissenters, Joyce gradually tried to move the BUF towards anti-Semitism. He developed delusions of grandeur, and saw himself as being appointed Viceroy of India, should Mosely ever succeed in becoming Prime Minister of a BUF government.

Mosley wanted to move away from anti-Semitism and concentrate on opposing war with Germany. He sacked Joyce in 1937 and later denounced him as a traitor in his autobiography.

In August 1939, Joyce was tipped off that the British government planned to detain him, and he fled to Germany with his wife. He subsequently became a German citizen and, through an old friend from his BUF days, he managed to get an interview for an announcer’s job with German Broadcasting House. He got the job and began broadcasting propaganda messages via the station’s English service.

Using the pseudonym ‘Lord Haw-Haw’, Joyce routinely started his broadcast to Britain with the words “Germany calling, Germany calling”, and launched into a sneering, aggressive diatribe against the British government, or made mocking references to the British troops and Germany’s military might.

It was all designed to undermine morale, and at first, the British listeners found it amusing. Joyce rapidly gained a huge audience of over six million regular listeners, and the Nazi Minister of Propaganda, Joseph Goebbels, gave glowing reports of his success to Hitler.

On 28th May 1945, advancing British troops captured Joyce, and returned him to London, where he was tried for high treason. He was convicted, and sentenced to death by hanging, but he appealed to the House of Lords.

The appeal was dismissed by the Lords, and Joyce, aged 39, was executed on 3rd January 1946. He was unrepentant to the end.