Alfred Rosenberg was a Nazi before Adolf Hitler became one. He later on served as the Nazi’s interim leader. He is also a known author of a best-selling book about the “Aryan” struggle against the Jews.

Rosenberg formed a task force of Nazis that mainly took charge of looting European art loaded in trains during the early Nazi era. The task force was named after him.

He worked his way into the Nazi inner circle being a leading Nazi, aide to Hitler and even confidante of the Fuhrer.

In July 1941, Adolf Hitler placed him in a very strategic leadership position taking charge of territories of the Soviet Union occupied during the German invasion.

In Rosenberg’s diary, he wrote that Hitler told him, “Rosenberg, your great hour has come.”

The Washington Post reports the transfer of the Nazi leader’s diary by the federal authorities to the U.S. Holocaust Memorial Museum last Tuesday, December 17. The diary consists of 425 pages and written by hand by Rosenberg. It vanished after the war and the memorial museum has been hunting for it for years.

The U.S. Immigration and Customs Enforcement seized the document from a scholar near Buffalo last spring. The scholar was said to have acquired the missing diary from an aide to a deceased military prosecutor who took it home after the war trials.

Rosenberg was one of the Nazis who was tried as a war criminal after the Second World War. He was 53 when he was hanged in 1946.

Many historians and scholars have been searching for Rosenberg’s personal diary to get a glimpse of the happenings in Hitler’s inner circle. The historical document, however, has omitted many details of the Nazi’s war plans for world domination and mass genocide.

“Rosenberg obsessed a lot about the Jews — just not in his diary. He saw no reason to elaborate on fundamental Nazi goals, as he regarded them as self-evident,” Jurgen Matthaus, director of applied research at the museum’s Center for Advanced Holocaust Studies said.

Rosenberg was said to have raised the Jew issue on many occasions. In his diary entry dated March 28, 1941, he mentioned an opening conference of the Institute for Research into the Jewish Question, which the Nazi theorist himself organized.

“I regard the conference as a success. It is, after all, for the first time in European history, that ten European nations [were] represented at an anti-Jewish conference with a clear program to remove this race from Europe,” Rosenberg wrote.

“And now this perception of a historic necessity is backed up by force.”

Matthaus said that the Soviet Union Nazi-controlled territory, under the jurisdiction of Rosenberg, “was the first to witness the systematic execution of Jewish men, followed within weeks by the murder of women and children.”

The diary made but little mention of Rosenberg’s  brutalities against the Jews from 1941 to 1942. Little can be discovered out of the document during this period because the pages are “riddled with holes,” according to Matthaus.

“If you are looking for shattering revelations about the Nazi era, you’re not going to find them. His diary often seems muted, if not silent, on crucial topics and important events, including the persecution of Jews,” he said.

“There’s a lot of surprising material,” he said, but “this is not the smoking gun. This is not the silver bullet. This is more a piece of a huge puzzle with many pieces that all need to be brought together.”

The entries are penned in black ink that display Rosenberg’s careful handwriting. The topics include the power struggles within the Nazi party. In fact, Matthaus think that the diary was more political than personal. 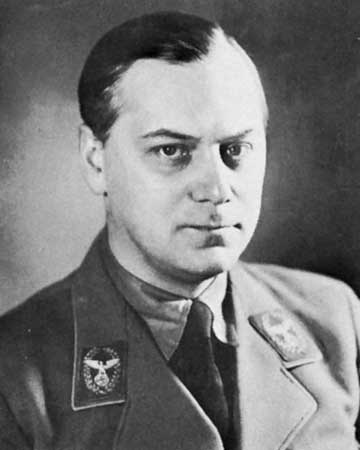 Some entries even seem to the museum authorities like minutes to meetings. Rosenberg claims, in one diary entry, that he was not bent on keeping a diary so he chose to stick to summaries of events.

“He’s not a thinker,” Matthaus said. “He’s an ideologue. . . . Pure Nazism, in his mind, is the plan Germany should follow into the future.”

However, at the near end of the diary, Rosenberg writes away his demise about the destruction of his house in Berlin at the end of World War II. He writes away his lament for the damaged books that littered on his ravaged library. He made mention of a specific book that he has salvaged by one poet, Ranier Maria Rilke. Only bits of information can be gathered about his family from the diary.

According to the museum, Rosenberg was born in Estonia of an Estonian mother and a father of German ancestry. His name may suggest that he is of Jewish roots. But, a Nazi investigation reveals that he was of Estonian background and Baltic-German ancestry.

He was a very influential man. During the later part of the Nazi-era, however, he was overpowered by tougher men such as Joseph Goebbels and Heinrich Himmler.

“He gets kind of phased out. You see his disillusionment, his frustration,” said Matthaus.

Rosenberg vented his frustrations in his diary for not being able to personally brief the Fuhrer for eight months at one point.

Despite his vexations, he remained a staunch Nazi until his hanging on Oct. 16, 1946.

The diary has a digital copy. The transcript is available in German on the museum’s website. The museum said that they have no copy translated in English as of this writing.

The diary covers the period from 1936 to 1944 in more than 400 loose-leafed pages. It was taken by the Allied forces in 1945 as an evidence for the Nuremberg trials for war crimes which included Nazis like Rosenberg.

The diary was taken by a German American war crimes prosecutor, Robert M.W. Kempner. He took the diary home even if the act was “contrary to law and proper procedure” according to the museum.

Kempner resided in Lansdowne, Pa. He died in 1993 and since then, the diary went missing. The authorities had to search for leads until it was discovered that the diary ended up in the hands of the scholar in New York.

Sara J. Bloomfield, director of the museum, said during the turn-over ceremony of the diary, “This historical document, from another continent in another century, is now, we think, in its proper home.”