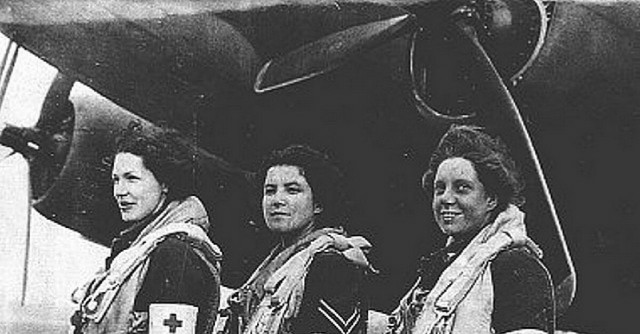 Lilian West from Cardiff may be one of the last surviving “Flying Nightingales”.

The Flying Nightingales were air-ambulance nurses who risked their lives during WW2 to save wounded soldiers. They were a group of 200 nurses who made up the RAF’s Air Ambulance Unit, which operated under 46 Group Transport Command.

For Lilian West the choice to become an air ambulance nurse was a deeply personal one. Her father had been wounded in action in World War One, and she saw it as her responsibility to help others in the outbreak of World War Two. So in 1941, when she was only 17 years of age, she signed up and trained to become a nursing orderly with the Women’s Auxiliary Air Force.

In Exter she spent just six weeks learning how to treat burns, apply oxygen, administer injections, and cope with injuries as severe as severed limbs, broken bones, and head trauma.

The nurses would start the day incredibly early; carrying their equipment with them, they boarded an R.A.F Dakota from Down Ampney that would transport them across the channel and into France.

Mrs. West personally knew only one volunteer who was ever killed in battle working as a Nightingale. Her name was Margaret, and she was killed while working alongside a Canadian squadron.

“Of course we were afraid,” Mrs. West said. “Your heart was in your mouth. You never knew when you were going to get hit by the shots that were flying all around you.”

The group left in the morning carrying supplies to deliver to Allied troops fighting all across mainland Europe, and it returned in the evening carrying casualties. “We would fly over with medical supplies and drop them off,” Mrs. West remembered. “Then the wounded would get on and we would take them back to England.”
Lilian spent 5 years working for the Nightingales and, many years since then, she is still traumatized by the things she saw.

She brought an African-American soldier all the way from Belgium to Britain to be treated, only to have him turned away at the hospital because of the color of his skin. “I still feel upset about that,” said West, the BBC News reports.

“The things I saw, I couldn’t talk about. I was on duty one day and apparently a rocket had backfired on a Navy boat, taking the top off an officer’s head. I had to take him to the Radcliffe Infirmary in Oxford.”

According to Kara Holliday, an ex R.A.F air-traffic controller, the women deserve to be remembered properly. “All of the flying nightingales were volunteers,” she said. “Their rank wasn’t acknowledged, they weren’t given medals. They were civilians in uniform.”

The surviving members of the Nightingales were honored with a lifetime achievement award that was presented by the Duchess of Cornwall in 2008. Other than that, although the Nightingales rescued an estimated 100,000 wounded soldiers from France alone, they remain a group that history has almost entirely overlooked.