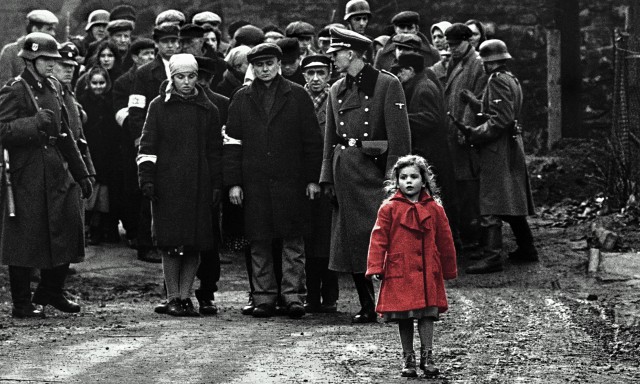 While Schindler’s List proved to be one of the most iconic movies depicting World War II, many viewers do not know that making it was difficult for some of the actors and actresses.  Many know that the movie was shot in black and white with only one blotch of color – the little girl in the red coat.

The little Polish girl who played the girl in the red coat has now revealed one of her secrets. Oliwia Dabrowska had promised the director, Steven Spielberg, that she would not watch the movie until she was 18 years old.  However, she ended up breaking that promise when she was 11 years old. It proved to be a big mistake on her part, as watching the movie that young left her traumatized.

Dabrowska was only three when she landed the role in 1993.  She said that she could barely make it through the whole move.  Of course, being only three years old, she did not understand the concept of the movie or the book that the movie was adapted from.

Dabrowska regrets that she ever broke her promise to Spielberg. At age 11, she said that she was ashamed for having been in the film and told her mother and father not to tell anyone that she was even in the movie.  However, she watched the film again at age 18 and realized that she was part of the movie’s success, and she could be proud of her role.

Schindler’s List is a 1993 American epic historical period drama film, directed and co-produced by Steven Spielberg and scripted by Steven Zaillian. It is based on the novel Schindler’s Ark by Thomas Keneally, an Australian novelist. The film is based on the life of Oskar Schindler, an ethnic German businessman who saved the lives of more than a thousand mostly Polish-Jewish refugees during the Holocaust by employing them in his factories. It stars Liam Neeson as Schindler, Ralph Fiennes as Schutzstaffel (SS) officer Amon Goeth, and Ben Kingsley as Schindler’s Jewish accountant Itzhak Stern.

Ideas for a film about the Schindlerjuden (Schindler Jews) were proposed as early as 1963. Poldek Pfefferberg, one of the Schindlerjuden, made it his life’s mission to tell the story of Schindler. Spielberg became interested in the story when executive Sid Sheinberg sent him a book review of Schindler’s Ark. Universal Studios bought the rights to the novel, but Spielberg, unsure if he was ready to make a film about the Holocaust, tried to pass the project to several other directors before finally deciding to direct the film himself.

Principal photography took place in Kraków, Poland, over the course of 72 days in 1993. Spielberg shot the film in black and white and approached it as a documentary. Cinematographer Janusz Kamiński wanted to give the film a sense of timelessness. John Williams composed the score, and violinist Itzhak Perlman performs the film’s main theme.

The girl in red

Schindler sees a girl in red during the liquidation of the Kraków ghetto. The red coat is one of the few instances of color used in this predominantly black and white film.
While the film is shot primarily in black and white, a red coat is used to distinguish a little girl in the scene depicting the liquidation of the Kraków ghetto. Later in the film, Schindler sees her dead body, recognizable only by the red coat she is still wearing. Spielberg said the scene was intended to symbolise how members of the highest levels of government in the United States knew the Holocaust was occurring, yet did nothing to stop it.

“It was as obvious as a little girl wearing a red coat, walking down the street, and yet nothing was done to bomb the German rail lines. Nothing was being done to slow down … the annihilation of European Jewry,” he said. “So that was my message in letting that scene be in color.” Andy Patrizio of IGN notes that the point at which Schindler sees the girl’s dead body is the point at which he changes, no longer seeing “the ash and soot of burning corpses piling up on his car as just an annoyance.”