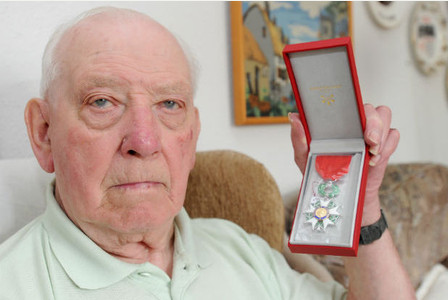 A British Army veteran who took part in the D-Day landings of World War Two has been awarded France’s highest military honour, the Legion of Honour, 70 years after the end of World War Two.

Roy Howe, who is now 90 years old, took part in the D-Day landings at Normandy and he helped around 200 men who were wounded to escape enemy fire.

Roy received his Legion of Honour in the post along with a letter of thanks from the UK’s French ambassador.

Roy, who is from Leicester, was a torpedo man in the Royal Navy during the war. He says that during the D-Day landings there weren’t any torpedoes being deployed since it was all focused on the ground troops. So Roy was surplus to the mission taking place.

It was when Roy’s commander called him and other naval crew who didn’t have a role up that they were given the job of getting as many wounded soldiers off of the beaches as possible. They were told to go and retrieve as many injured as they could and bring them back to the Royal Navy’s fleet which was moored in the English Channel, so that they could be given medical care.

Roy and the others took a small boat and made their way to Sword beach where they found chaos and carnage. Roy remembers how the men didn’t want to leave their boats that were bringing them on to the shore, but their commanders were ordering them to get off the boats and get on the beach.

Roy says there was constant enemy fire and bullets being fired in all directions. He also says the noise was louder than anything else he can remember.

Roy was only a teenager at the time but he and his team were able to get over 200 injured men off of the beaches and back to their ship, the HMS Serapis. Before long the ship was full of injured men and so the captain turned the ship around and headed back to Portsmouth on the English coast where they could offload the men.

After the war, Roy left the Royal Navy in 1947 and became a colliery man in Leicester. He worked there for the rest of his life until he retired in the early 1980s, the Leicester Mercury reports.

Roy married Doris and they still live together today. Doris has Roy’s medal in a prize position in the centre of the lounge next to Roy’s armchair in their home.

Roy says he’ll never forget the things he saw during the rescue and is grateful for the French award.