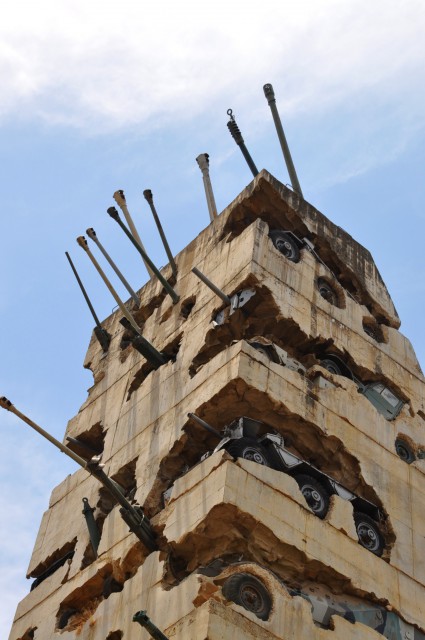 Beirut was once the Middle East’s most dangerous and war-torn cities. Today, the city focuses its peace efforts on one location – its Monument for Peace in the centre of the city. However, the monument is anything but peaceful, since it is constructed using Soviet T55 tanks, munitions, guns and other military vehicles, all embedded in concrete.

The monument was built 20 years ago this month and was built by an architect who lives in France, Armand Fernandez.

Its official name is the Hope for Peace monument, but it has become known as the Tank Monument and is located near to Lebanon’s government defence buildings.

In 1995, when the monument was unveiled, Armand said that by embedding things into something else, fossilises the objects, just as you find fossils in the earth. Its unveiling coincided with the five year anniversary of the end of the Lebanese civil war in 1990.

The end of the country’s civil war meant that the military was left with an excess of military vehicles, guns and other military equipment. So when the idea for the monument was developed the Lebanese authorities were more than happy to donate the equipment to the architect.

The monument stands at 10 stories tall and has been formed in the shape of the pyramid. Every single piece of equipment or vehicle was held in place and welded to the solid structure, using concrete and sandbags to keep it in place. Once in place and the concrete was set, they were all repainted with new camouflage colours. 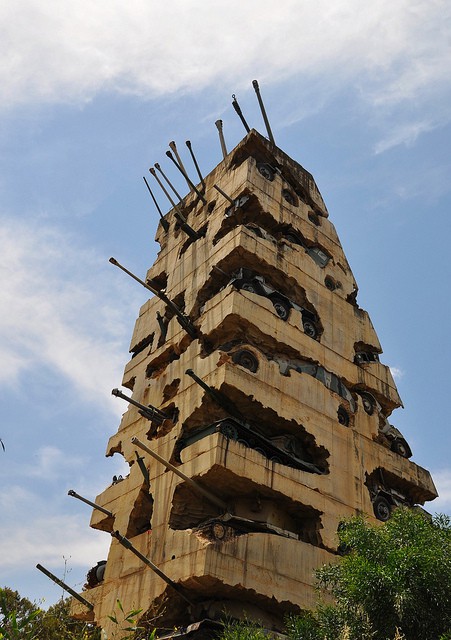 Armand believes that a city with art is better positioned to deal with civil strife and will flourish, more so than one without art.

The Lebanese Civil War lasted for 15 years from 1975 to 1990 with around 120,000 people killed, almost one million people leaving the country and almost 80,000 still being displaced to this day, the ArabianBusiness.com reports.

As the dynamics of the Middle East changed after World War Two, Lebanon’s political society became split between pro-Western parties and Left-Wing organisations that sided with Soviet backed countries in the region.

It was the Taif Agreement in 1989 that began to bring an end to the conflict. By early 1991 an amnesty law had been passed which pardoned all political crimes. All militia groups were disbanded except for Hezbollah, and the Lebanese Armed Forces began to rebuild the country’s army.