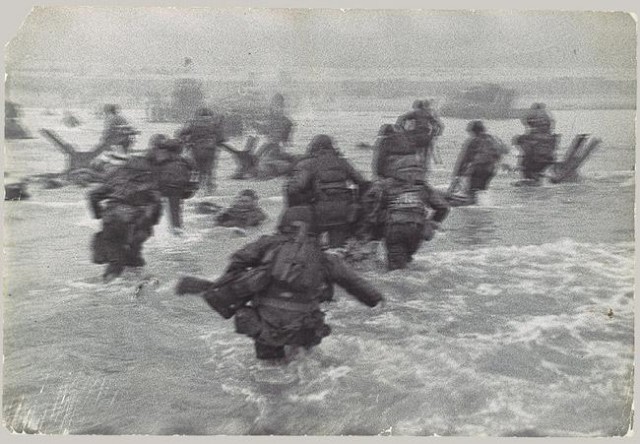 Alan Huddleston, 96, was a proud infantryman and a Southern gentleman who went to join his comrades in that great barracks in the sky on the 10th February 2016. Huddleston, who was living at the English Meadows-Elks  Care Home in Bedford, was the last of the so-called Bedford Boys and now that proud unit is a memory for the living and their bravery is remembered in stone on a D-Day Memorial in the town.

Men from the city of Bedford came forward in numbers at the start of the war and enlisted making up Company A of the 29th Infantry Division, 116th Infantry Regiment, which was formed on the 3rd February 1941. In October 1942 the division sailed for England aboard the Queen Mary and were quartered throughout England and Scotland. They trained for an invasion of Northern Europe and in May 1943 they were moved to the south of England where they undertook training in how to assault fortified positions.

The Bedford Boys took part in the D-Day landings, supporting the western flank at Omaha Beach. Omaha was the most difficult of all the beaches due to its terrain and the fortified bluffs overlooking the beach. The 116th Regiment was assigned to sectors Easy Green, Dog Red, Dog White, and Dog Green but in the chaos of the landing they missed their landing spots.

The 116th landed at 06H30, including some thirty men from Bedford, and they were almost immediately annihilated by withering German fire from the cliffs. By the end of the day only 11 Bedford Boys were still alive including Alan Huddleston, who had broken his ankle in training for D-Day and thus did not make the landing and was back in England. Later four more men died as part of the Normandy landings.

Bedford, at the time, had a population of 3, 200, so proportionally this little town nestled in the Virginia countryside suffered the worst losses on D-Day and in recognition of their sacrifice, a national memorial for American D-Day veterans has also been built in the town. The memorial maintains an international flavour as the inscription reads, “In Tribute to the valor, fidelity and sacrifice of Allied Forces on D-Day, June 6, 1944 and all the names of the Bedford Boys are inscribed at the memorial.

It may be true that Huddleston did not take part in the D-Day landing, but he had trained and prepared with the others from his hometown and when he rejoined the company two months later he was devastated to find that so many of his mates had been killed. Alan Huddleston was a member of this noble group and his name is inscribed on the memorial along with all the rest of the men from this town that paid such a high price, during WW II.

After the war Huddleston returned to Bedford and opened a photography business in the town. The people in the town knew him in many guises as friend, businessman and most importantly as the last of the brave men that stood up to be counted when asked, those known as The Bedford Boys.