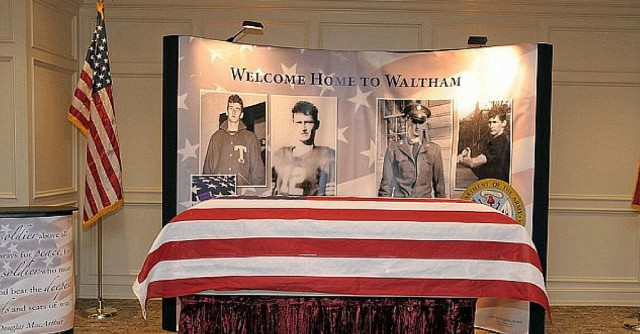 A Korean War hero who died in action and was missing for nearly 66 years is finally being returned home for a full military funeral and send-off.  Sergeant Robert Dakin served during the Korean War, when the northern Communist forces took on the U.S. and South Korean forces.  He was just 22 years old when he was initially recorded as missing in action during the Battle of Chosin Reservoir in 1950.

It took another three years for the U.S. military to declare that he was dead, during which time his parents were hoping that he might still be alive.  Now, through a DNA test conducted by North Korean researchers, Robert’s remains have been found.

North Korea has been engaged in a program with the U.S. to return remains of military personnel who died on location during the Korean War. During the 1990s, more than 200 boxes of remains were provided to the U.S. and were thought to have contained around 600 U.S. soldiers. Robert’s remains were among those returned.

Robert has now been buried in his hometown of Waltham, Massachusetts in the U.S. His coffin was pulled through the main streets of Waltham with hundreds of residents waving flags and seeing him to his final resting place.  He was buried at Mount Feake Cemetery with full military honors.

Robert had joined the US Army two years before he died at the age of 20. He became an infantryman for the US Army’s L Company, 3rd Battalion, 31st Infantry Regiment of the 7th Infantry Division.  His company was deployed to the Battle of Chosin Reservoir, which took place in 1950 and lasted for 17 days. Around 10,000 US troops lost their lives in that battle alone.

One of Robert’s descendants, Derek Hughes, said that Waltham was the only home Robert (or Bobby, as he was known) ever knew. He said that it is a great end to his journey to finally be buried back at home.  As part of the service, Robert’s family was awarded the Purple Heart by a military honor guard.