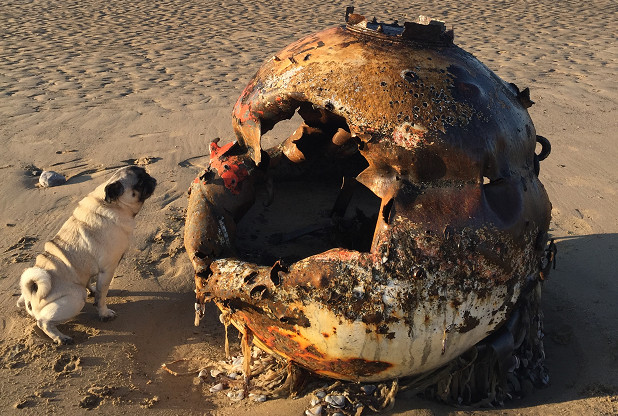 The Sea Mine after detonation

A family came near to disaster this summer on a Welsh beach at Burry Port in Carmarthenshire, when an unexploded World War Two bomb washed up on the coastline.

Kelly and Gareth Gravell, from Carmarthenshire in Wales, spent a day out during the summer holidays with their two children Erin and Ellis at Burry Port on the Welsh coast. They spent most of their time on the beach with the two children playing on the coastline, including what they thought was a harmless beached buoy.

However the rusted buoy turned out to be an unexploded World War Two bomb.

The bomb had been encrusted with barnacles and was unrecognisable after spending more than 70 years at sea.

At the time the family had taken pictures of their children playing on what they thought was a buoy. It wasn’t until about a week later that they saw stories in local media about the beach being closed and a bomb squad being deployed to the beach to safely disarm a World War Two bomb that had become beached.

A one km area around the bomb was sealed off by the local Dwyfed-Powys Police, while bomb experts were sent in to make the bomb safe.

Mine made safe in a controlled explosion http://t.co/nkAPFQe3eO @RoyalNavy Pic by G Photography pic.twitter.com/tc232wqJ7j

When the Gravell family saw the news, they were shocked and father Gareth got onto Twitter to tell of his shock, whilst sharing the pictures they had taken of the children posing on the bomb just a week earlier.

The family said they even joked about that it might be a bomb as Gareth found rusted chain links on the surface among the barnacles. Now the family says that the reality of what happened is sinking in and they can’t believe how near to disaster they could have been.

Nevertheless the family say that they won’t hesitate to return to the beach. Even though they say they are going to be more cautious about what washes up from now on. The whole family went back down to the beach to see the bomb being safely disarmed, The Telegraph reports.

The local council has said that they have taken all action required and want to reassure the public that the beach is now safe and has been reopened.