When RAF Flight Lieutenant Alan Pollock took off in his Hawker Hunter on the 5th of April in 1968, he didn’t think about making history. He was simply upset about the humdrum plans for the RAF’s 50th anniversary celebration. The High Command had decided a daytime “fly past over the city was inappropriate.” Aircraft flying over London was inappropriate? The troops were outraged.

The RAF had been proudly flying for 50 years beginning with biplanes shortly all the way to turbo jets. Besides that insult, a fancy dinner at the Lancaster House with the Queen was also cancelled. The thirty-two year old father of four was no dare-devil—but he was a very experienced fighter pilot having been stationed in Germany and trained in several different types of aircraft. Indeed, he carried the designation of “exceptional from Cranwell RAF Training College.

The Beatles song “Lady Madonna” may have been playing on the radio at the Royal Air Force base, and the United States was certainly reeling from the shock of the Martin Luther King, Jr. assassination on April 4. Movie theaters played “2001-A Space Odyssey” while the psychedelic sixties screamed in the streets of London.  Great Britain sent teams to the Winter Olympics in February, but the athletes came home with no medals. The armed forces were being ignored and even scorned. Now, only a parade and a ground based celebration were planned in London to commemorate the anniversary. Since the “fly past” was not to be a part of the festivities, many pilots were justifiably upset.

Lt. Pollock didn’t realize he was angry. Being on the verge of pneumonia, he likely shouldn’t have been flying having consumed antihistamines and even some champagne at one of the base parties. At his own admission, he just acted on an impulse. Plus, he felt he was representing his entire airfield.  While flying in formation with four other Hunter Hawks on leaflet bombing raids on other RAF fields, Pollock’s jet suddenly peeled off and went off on its own. In that split second, the Flight Lieutenant decided it was time to make a statement.

He flew fast and low, buzzing government buildings and the city of London in general. Imagine how the windows rattled in the Houses of Parliament when the jet blasted over the buildings three, count ‘em, three times adding a blast of the Rolls-Royse Avon engine to the arguments there. People on the street would have looked up in alarm, seeing only the glow of the engine as the aircraft streaked past. London is a big city, and he knew to avoid the London (later Heathrow) Airport. So he “beat up” government buildings and various airfields before finding himself following the Thames River.

He rolled the fighter to and fro through the twists and turns of the river, skimming the tops of road and rail bridges, and passing over even the famous London Bridge. He throttled back to minimize the engine noise. His view from the cockpit, in his own words, “…one of those rare perfect 8/8 Gordon’s, crystal, gin clear days where all the colours shout out brightly.” Zipping along at over 200 mph, he found the Tower Bridge of London rapidly approaching. This is when the split second decision from a single idea would change his life.

The Tower Bridge crosses the Thames with two levels. The road bed lies close to the surface of the river and is fitted with sections which lift to allow river traffic to pass. A walking platform stretches between the towers above the road, creating a horizontal window of 200 ft by 110 ft. Through this opening the first plane passed in 1912. A Short-Farman hydroplane easily flew through the space, the pilot stating, “It isn’t so risky as it appears.” However, he was flying much slower than our Lt. Pollock.

From 1931 to 1953, several other aircraft braved the tempting target and flew through the bridge including one 61 year old stunt pilot who obtained access to a plane and flew under fifteen of London’s bridges and a father acting on a dare from his son. Lt. Pollock likely knew this history when he was faced with the Tower Bridge. Knowing it had been done before, but not in a jet fighter and confident in his skill, he decided to make a statement about the fortitude and value of the RAF. 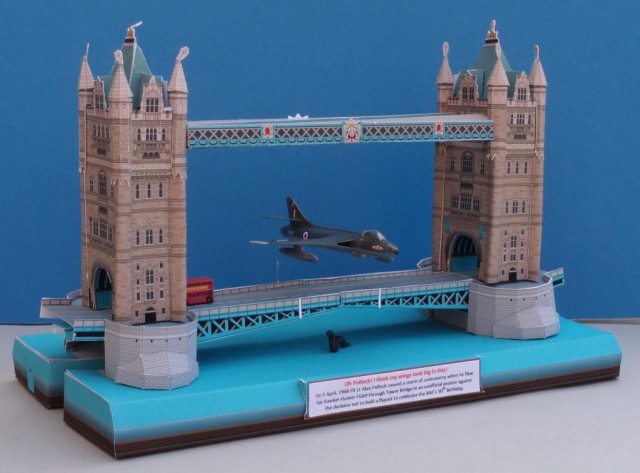 After a quick check to be sure no tall vehicles or lines were in the way, he aimed for the bridge opening. In a flash he threaded the eye of the needle with the jet likely frightening drivers on the road and pedestrians on the walkway. He was later quoted saying:

” It was easy enough to fly over it, but the idea of flying through the spans suddenly struck me. I had just ten seconds to grapple with the seductive proposition which few ground attach pilots of any nationality could have resisted. My brain started racing to reach a decision. Years of fast low-level strike flying made the decision simple…”

How jubilant the fighter pilot must have felt! Yet when he landed, Lt. Pollock was promptly arrested. The RAF contemplated court martialing him, but the City of London Police, recognizing the unusual situation, declined to file charges against the pilot. Pollock’s pneumonia set in and the high command instead released him from the service for medical reasons. Also, the rank and file, not to mention the admiring general public, was on Pollock’s side and a trial would have been a public relations nightmare for the RAF.

Thus, Flight Lieutenant Alan Pollock has been the only pilot to fly a fighter jet through London’s Tower Bridge. That quick decision did indeed affect the rest of his life and sealed his place in history. The medical discharge was viewed by most as a suitable way to avoid punishing the Lieutenant for acting on emotions widely shared among pilots in the RAF, including some top brass.  Eventually, in 1982, he was able to clear his name and was fully exonerated of any wrongdoing from his actions in 1968.

A SimHQ Video of the Fly Through:

In 2012 for the opening movie of the Olympics 2 helicopters flew through the tower bridge: