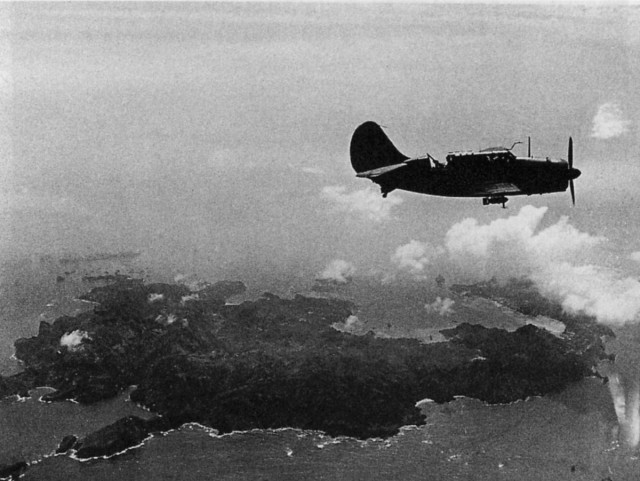 The Japanese island of Chichi Jima lies in the Pacific Ocean, about 150 miles north of Iwo Jima. At 24 square kilometres, it is the largest in a small chain of islands known as the Ogasawara archipelago.

Chichijima currently has a population of some 2000 people, but at the start of the Second World War over 5000 Japanese army and navy personnel were based on the island.

It was a major location for long-range radio communications and the site of a military seaplane base. By the end of the war, approximately 25,000 troops were stationed in the island chain.

Because of its strategic importance as a radio communications base, Chichi Jima was heavily fortified, and a seaborne invasion would have been costly for the Allies. Consequently, the island was subjected to many aerial attacks by US aircraft in 1944/45.

More than one hundred US airmen were shot down, either over the island itself or over the sea surrounding it.  Most of the men died in their aircraft or were killed by Japanese troops, but a few escaped instant death, and some of those were captured.

Only three men were rescued by US submarines, and of those was George H. W. Bush, who eventually became President of the United States.

The captured men were subjected to varying degrees of torture before being killed with bamboo spears or Japanese military swords, but evidence came to light of some far more barbaric practices.

At least four of the captured men were beheaded, and their livers and thigh muscles were later served up at banquets attended by senior Japanese officers. A witness at a later War crimes trial, held on the island of Guam, stated that he saw one American beheaded as he was forced to kneel by an open grave.  The following day human flesh, including a liver, was served to Japanese officers for dinner.

There was evidence of at least three other similar events, all of them involving cannibalism, and Rear Admiral Kunizo Mori and Army Major General Yoshio Tachibana were both sentenced to death by hanging for their part in ordering the deaths and subsequent consumption of the American airmen.

At the time, the appalling crimes were considered too distressing to report to the families of the dead men, and the files were classified as secret.

In 2003, a book by James Bradley called ‘Flyboys’ was published, and it included details of the events on Chichi Jima.

At the time, Bradley said that although the parents of the airmen involved had all died, he had notified remaining family members of the details.