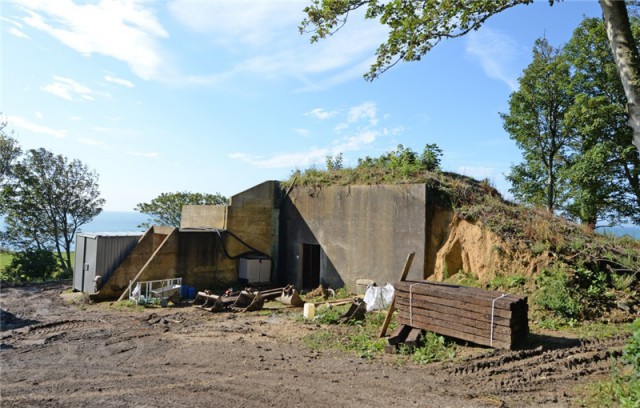 A World War Two underground air raid bunker in the Isle of Wight has been sold to a couple who would like to convert the bunker into their new home.

The Isle of Wight bunker in St Lawrence has been purchased by Lincoln Miles, an architectural designer, and Lisa Traxler, an artist. The couple would like to restore and develop the bunker so that they can use it as a private home to live in.

The bunker was previously a Royal Air Force radar station and was ideally positioned to monitor the south coast of Britain during the war. It is located in St Lawrence looking over the coastline.

The creative couple said that they were looking for a new home, and when they found the bunker thought it was the ideal project into which they could extend their creativity.

They plan to work together using their combined skill sets to use the bunker space to create a home environment. They say that if they don’t do this project then the bunker will be left to ruin and that it is important to protect and preserve remnants from the last line of defense against Nazi Germany.

The couple would like to leave the bunker as a memorial to the radar station that once occupied the site and believe that it will stand in good stead to educate the younger and future generations to come.

The bunker’s land also includes barracks where the couple have established their design studios from which to run their respective businesses.

They plan to leave the bunker as it is on the whole, aside from a small extension that will be attached to it and say that any changes will fit to the surrounding landscape.

The roof is to be covered with earth and grass seed will be planted so that it is naturally incorporated into the building’s surroundings and to stay in keeping with the bunker’s underground theme.

The RAF built the bunker at St Lawrence as a reserve post for the main radar base, which was located at the top of St Boniface Down at Ventnor and was part of a whole network of radar stations throughout Britain, the IWCP reports.

In 1941 RAF Ventnor was bombed and the reserve station became a necessity to take over whilst it was out of action. RAF St Lawrence was operating from 1941 onwards and closed just six years later after World War Two had ended.