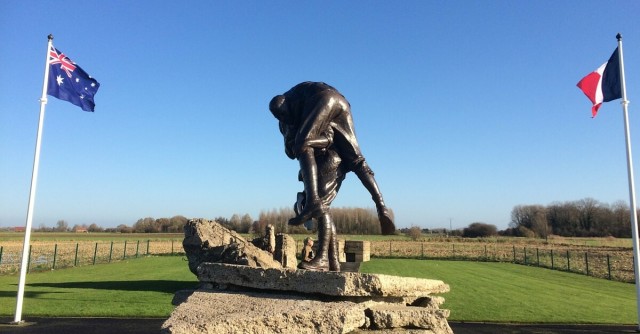 Australian ceremonies to remember the dead exclude British citizens from – and possibly minimize British contributions to – the catastrophic Battle of Fromelles.

Ask most Australians about the “worst day in Australian history,” and they’ll almost all give you the same answer. It came on July 19, 1916 – and it didn’t take place in Australia.

It was the Battle of Fromelles, in France. It was the first time Australian soldiers, sent to the continent to aid their British allies, participated in a major offensive against the German forces. The story goes that while Australian officers repeatedly begged their British commanders not to go through with the attack – which they argued was a strategic blunder sure to cost thousands of lives – the British refused to listen and ordered the attack anyway.

The Australians were right – 5,533 Australian soldiers were killed, captured, or injured during the battle.

2016 marks the hundred-year anniversary of the battle, and a centenary is being held to commemorate those who died. But the Australian government is now the one under fire – for not allowing British citizens to attend the event to be held in France this summer. Only Australians will be allowed to watch or participate in the ceremonies.

Scheduled for July 19, the same day as the battle, at the Pheasant Wood Military Cemetery in the town where it originally took place, Fromelles, France, the service is designed to remember those who died serving their country. But British critics of the Australian government’s choice highlight the 1,547 British soldiers reportedly killed. Their descendants and relatives are unfairly excluded, critics argue.

The Australian Department of Veterans’ Affairs replied that the ceremonies are not designed to commemorate everyone who died, just the Australians. They highlight the fact that other nations have held similar ceremonies, focusing on their own casualties, and have not received similar criticisms, including Britain itself – which is holding a memorial in July in the town of Thiepval.

“The ceremonial focus will be on the Australian role in the battle and on the Australian soldiers lost,” the spokesman told a British newspaper. But the Australian government is also allowing French citizens to visit the site, perhaps because the event will take place on French soil.

“The Australians want to airbrush the British out of the battle,” said Michael Bemrose, grandson of a British soldier killed in the battle. “Men from both countries fought together and died together.” He called the decision “unilateral” and seemed to think the Australians were trying to rewrite history.

The battle was originally intended to divert German forces from where the Somme offensive was gearing up. Unfortunately, as was often the case in World War I, the battle began with a massive artillery attack that not only ruined the Australians’ chance of surprising the enemy, but left the Germans’ all-important machine-gun emplacements intact.

But British commanders remained resolute, and so on the afternoon of July 19, Australian Infantry of the 5th and 61st British Divisions charged into a hail of machine-gun fire. Thousands were hit in the no man’s land  between the trenches. Only two sections of the German trenches were captured, but they could not be held for lack of support.

By the next morning, the battle was over.  Australians, the brunt of the infantry, suffered more than 5,000 casualties – by far the worst of any country participating. Five hundred British soldiers lay dead, with another 1,000 wounded. Germany lost “only” 1,000 soldiers.

The war memorial on the site remembers the attack as a “complete failure” that did nothing to aid the Somme offensive, an even bloodier battle.