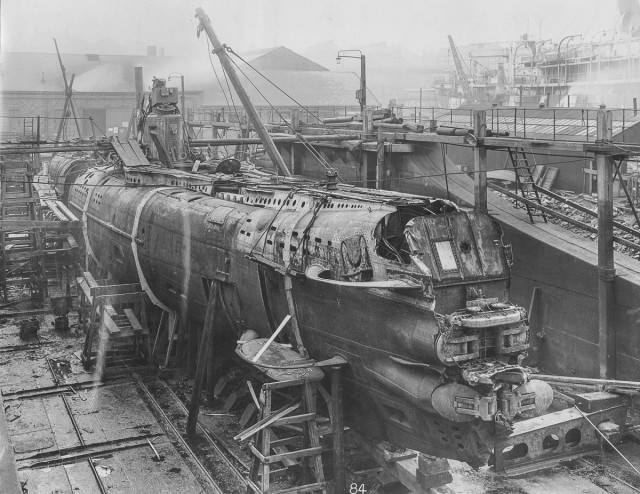 The images are eerie and ghostly to put them mildly, depicting the cramped and hostile conditions of the First World War’s most deadly ‘killing machine’. This killing machine managed to sank no less than ten ships in a very short period of time causing scores of deaths.

The images belong to a German Unterseeboote, famously known as U-boats. Even before the First World War Broke out, Germany had a stockpile of more than 350 such killing machines, which it used very effectively against its foes during the war. This particular U-boat shown in the images released for the first time in a hundred years was forced to surface from the depth of the North Sea and torpedoed by HMS Garry a British torpedo boat destroyer.

After realizing the failure of taking the British Naval fleets head on, Germany decided to formalize an ‘ambush’ strategy fully utilizing its massive fleet of U-boats. Although these U-boats were not particularly successful against gigantic British warships, but small cargo and civilian ships were an easy prey for U-boats.

While preying on a merchant vessel convoy on a clear sunny day of July 19 1918, a twin-screw U-Boat 110 was spotted by HMS Garry escorting the merchant convoy. HMS Garry forced the lurking predator to rise to the surface and then destroyed and sank it by ramming it with torpedoes. After the war had ended later that year, the sunken U-Boat was recovered and brought in the Swan Hunter Docks in Wallsend, North East England. It instantly became a celebrity in Britain and a large number of photos were taken by the Royal Navy photographers, the Mashable reports.

Now after almost a hundred years later, these images provide a detailed tour of the structure and build of the German U-boat. These images are certainly not for the faint hearted folks, however a student of history would definitely find them revealing on so many levels. The conditions for those who worked on board these U-boats were not very favorable at all. These killing machines were able to travel more then 9,000 miles before needing any refueling, reaching maximum depths of 50 meters.

The mechanism of the boat was not only complex; it required nerves of steel to operate under such claustrophobic conditions. The images show a seemingly never-ending network of pipes and steering wheels swarmed with various gauges. One could see occasional beds and small handmade baskets lying in the corners as well.

The initial idea was to study the photographs and restore the U-boat to a full working condition, but the implementation of Armistice caused the restoration project to be halted.