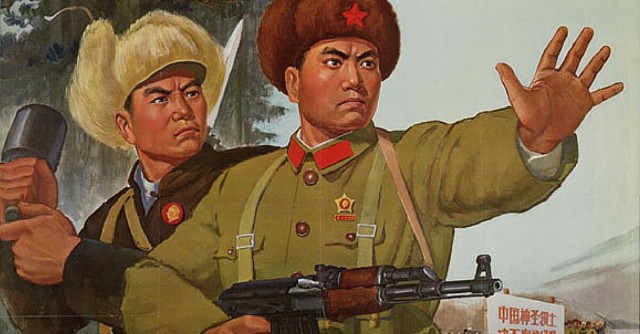 Americans remember the Cold War as a time when the world almost descended into a total nuclear war, that could have destroyed the world. For nearly fifty years, Americans and Russians alike looked to the skies with fear, that nuclear warheads could come raining down, resulting in millions – or even billions – of deaths.

It came seven years after the resolution of the Cuban Missile Crisis.  In March 1969 when Chinese forces raided a Soviet base on Zhenbao Island, killing several dozen Russian soldiers and wounding many more. Predictably, Russia wanted to retaliate in force. A war between Russian and China was a real possibility.  However,  leaders in Beijing and Moscow knew that escalation to a nuclear war was a real possibility and so both sides decided to avoid any more confrontations.

But the world came very close indeed to the horrors of a nuclear war.

Just ten years before Chinese forces raided Zhenbao Island, Russian-Chinese relations were excellent. Together, they were the world’s largest Communist states and close allies in the struggle against capitalism. But they did not have identical ideas, and both wanted to exert greater influence over the communist world and elsewhere. This led to an eventual split between the two largest communist powers. Russia and China had long squared off over territories that lay on their mutual border – these disputes went all the way back to before the countries underwent their respective revolutions.

There were a few minor incidents before Zhenbao Island, but that incident escalated things to a new level of tension. Soviet forces retaliated twice against the Chinese, but they sustained heavy casualties both times. Historians today believe that China wanted the clashes to occur and had, in fact, prepared for them. But why would China want to instigate trouble with their powerful neighbour and former ally?

It turns out that China had both political reasons to want to provoke the Soviets and wanted to gain a strategic  advantage on the Sino-Russian border. Soviet forces were largely concentrated in Eastern Europe, the nexus of capitalist power in the Old World. They were not prepared to engage their Communist neighbor to the southeast. China in the conflict was able to assert her power in the area, especially in the crucial Manchuria region, which has long been contested by the two countries.

China had the ability to raise a much larger army than Russia could field – and they were stationed near the border, ready to cross it should outright war break out. Russia would be unable to retaliate with any real strength until they had moved  their forces east, leaving their western borders relatively undefended. Russia chose not to respond in force because they could not risk dividing their army.

Thus, when provoked by China, Russia came forward with its hands all but raised in surrender. China secured the all-important Manchurian territories, and strengthened its negotiating position with Russia for years to come. This is arguably the case that still exists to this day.

But China’s gain almost came at the cost of a nuclear war. It was a high-stakes gamble – the world can be thankful that it never escalated further.