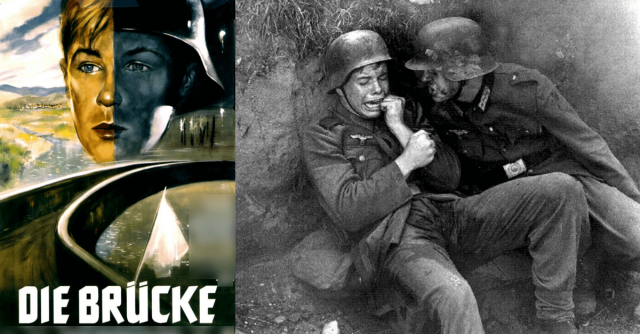 World Wars One and Two have been epitomized and preserved on the big screen through hundreds of war movies.

Many of the movies are incarnations from Hollywood, but some were originally from German origins such as ‘All Quiet on the Western Front’. The movie was a book before it was a movie by German author Erich Maria Remarque. The novel told the story of young soldiers who enlist in the army during World War One. They are slaughtered on the front lines and the story stood with a vehement anti-war message.

Vice versa ‘The Bridge’ is a little known German novel turned movie set at the end of World War Two and tells the true story of seven teenage boys living in Germany. They go about their everyday lives, but soon they hear that Allied tanks might be coming. Each of the boys receives a notice from the German Army whereby they have to enlist.

They all join and with just one day of training are put in charge of holding and guarding a bridge in their local area. Little did they know that the local German command planned to blow up the bridge to protect the locals from the incoming Allies. When their commander is killed before the Allies make it to the bridge chaos ensues.

In the book the early days before the boys are drafted are portrayed using flashbacks. But the movie is set in chronological order and so the viewer starts at the beginning when the boys are young and at school through to the chaos of when they joined the army. Their pre-army antics include one boy Karl finding out that his dad is having an affair with the owner of a local beauty salon, while another of the boys, Sigi, is teased endlessly for being the shortest and youngest, the A.V Club reports.

It isn’t until the last third of the movie that the focus gets to ‘The Bridge’ and a ferocious battle begins as the Allies try to make their way further and further east into Germany. The boys try to defend their bridge, but little do they know that even their own army wants to destroy it.

The film presents the boys as isolated and alone in their fight, with a close connection to their childhood surroundings. The scene is set for disaster since the boys are so young and they have little training and little support from the German Army. Only one survived and not because he fought bravely but because he fled the scene.

The battle for the bridge happened at the end of April 1945, just days before Hitler committed suicide.

The boys’ experience and actions were never recorded in any military records or communications, so it is just the book and film that share their plight.