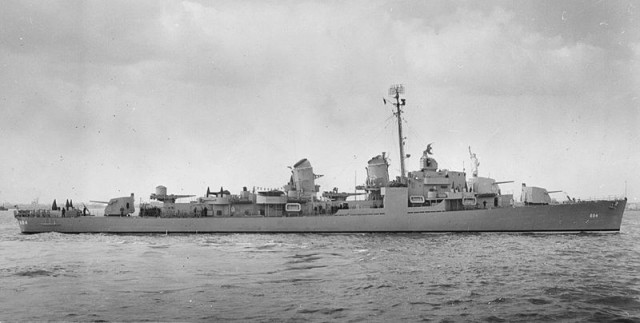 The USS Ingraham [Via]

The Nazis weren’t the only regime to roll out war time propaganda campaigns during the war. The Allied governments also produced many propaganda campaigns in order to promote their military and political interests as well as to help cover up any situations they didn’t want the general public to know about.

One of those was the death of 300 US sailors in the cold waters off the coast of Nova Scotia, Canada. A modern-day investigation into the disaster has shown that the death of the sailors was covered up by military chiefs and was turned on its head to be used as propaganda.

It is only now through the investigation that the true story of the incident has been revealed. The sailors were crewmen aboard the destroyer – the USS Ingraham. When the military was notified of the incident they believed that it could hurt the war effort if the general public found out about it and so the information became top secret and was hidden from public release.

The Ingraham set off from Halifax harbur in August 1942 as part of a protection convoy for two liners full of troops making their way to Scotland across the North Atlantic. The weather was against them with a heavy fog settling down on the surface of the sea around them.

During the journey someone aboard the convoy thought that they had spotted a German submarine and so the destroyers went on high alert and the USS Ingraham readied themselves to drop mines on the U-boats.

During the panic, one of the troop carriers rammed a destroyer instantly killing seven crewmen.

Five minutes later another ship carrying supplies rammed the Ingraham, it was cut down the middle and began to sink straight away.

Hundreds of its crew were trapped in the ship or were thrown into the freezing waters. As it continued to sink, the depth charges that had been readied to deploy on the German U-boats exploded around the carnage and killing hundreds of sailors, the National Post reports.

Only 11 crew from the USS Ingraham survived. Back at Halifax harbor the military were putting all information under wraps and kept it from the media based at the harbor.

The remaining damaged vessels made their way back to the harbor, but even those aboard didn’t really know what had happened. So the military said that the explosions were depth charges dropped to destroy German U-boats and that most of the troops were asleep below deck when the incident happened.

It turned out the suspected German U-boat was in fact dolphins. Yet the incident was turned into a heroic situation for Allied troops who fought off the Nazi submarines.