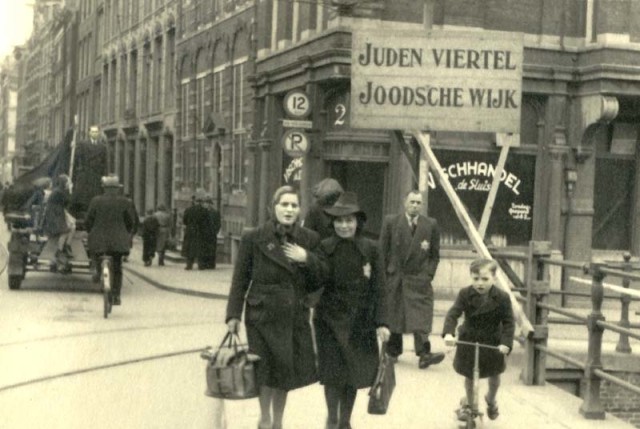 Mirjam Levie was born in Amsterdam in 1917. In 1938, she was still living in Amsterdam and had become engaged to Leo Bolle. He left the city that same year and travelled to Palestine to make preparations for his future life with Mirjam.

She stayed behind to continue her work as secretary of the Committee for Jewish Refugees. On 10th May 1940, Nazi troops invaded Holland – a neutral country – and five days later the Dutch government capitulated. Mirjam was trapped.  Unable to leave the city to join her fiancée.

In February 1943, The Nazi occupation force established the Amsterdam Judenrat – The Council of Jews, composed of a group of eminent Jewish men. These men believed that their job was to provide protection against anti-Semitism, but as time went on it became apparent that the Nazis had a different agenda; they intended that the Council should oversee the systematic eradication of Amsterdam’s Jewish Quarter.

The Committee for which Mirjam worked was amalgamated with the Amsterdam Judenrat, and she was privy to the inner workings of the new organisation.  She saw at first-hand how members of the Council tried to help as many Jews as possible to escape persecution while appearing to cooperate with the Nazis. The Council was deeply unpopular with many people who viewed its members as traitors.

In the same year, Mirjam began writing letters to her fiancée. She didn’t post the letters, intending to keep them as a kind of journal record of life under the Nazis to be shared with Leo when they were eventually reunited. She was sent to Bergen-Belsen, the same camp which housed Anne Frank, the young Dutch diarist, who died at Belsen, aged 15.

Mirjam continued to write letters to Leo and managed to keep them hidden from the Nazi guards. She took them with her when she was released as part of a prisoner exchange in 1944, and she travelled to Israel to marry Leo Bolle.

Leo never saw the letters; Mirjam decided to lock them away, so the pair could look to the future, rather than the past. Mirjam had three children, but tragedy haunted the family. Her son was killed in the 1967 Mideast war, one daughter died when her car ran over a land-mine in Syria, and her youngest daughter died of illness in 2011.

Mirjam’s letters to Leo lay undisturbed for over fifty years until, in 2002, Mirjam came across them once more. In 2015, she finally decided to publish them in book form as ‘Letters never sent’, a unique record of a young Jewish woman’s wartime experiences.