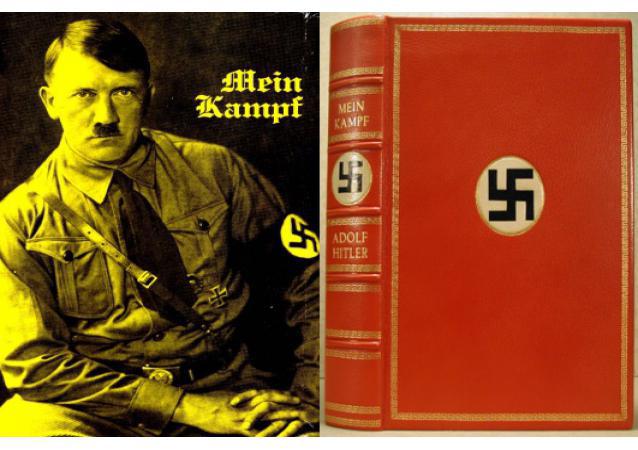 Mein Kampf has been variously described as a series of rants, or a stream of consciousness. Hitler didn’t write the book in the accepted sense of the word, he dictated it to Rudolf Hess – when he served a five-month prison sentence in Landsberg in 1923 and later at a Berchtesgaden inn.

The book reads almost like a political party manifesto, expounding Hitler’s thoughts on how the perfect society should be structured, and describing the methods – violent and non-violent – he thought necessary to achieve his aims. Hitler’s dreams of world domination are clearly evident, as is his conviction that this can only be brought about by violent suppression of what he calls ‘lower peoples’ by Aryans. Hitler says that “it is no accident that the first cultures arose in places where the Aryan, in his encounters with lower peoples, subjugated them and bent them to his will.”

The book is not an easy read, and when it was first published in 1924 it was not well received. Sales were poor, with people complaining that it was difficult to understand and rambling.

When Hitler became Chancellor of Germany in 1933, things changed. Mein Kampf became a ‘must have’ book, and by 1945 an estimated 12 million copies had been sold. It was a popular present for newlywed couples, and Hitler’s racial ideology was even taught in German schools. Mein Kampf made Hitler a wealthy man, although it is doubtful that many Germans read the book in its entirety.

At the end of the war, and after Hitler’s suicide the copyright in Mein Kampf became the property of the Bavarian government – Hitler’s residence at the time was in Munich. The State of Bavaria subsequently refused to allow further publication as a mark of respect for Holocaust victims and their families, and this decision was endorsed by the German Federal government. Selling the book commercially became illegal, although it was still legal to sell and purchase it privately as long as it doesn’t “promote hatred or war”.

70 years on, that is set to change. The copyright expires on 1st January 2016, when a new version of Mein Kampf will be sold in German bookshops, 70 years after the death of its author, the NBC News reports.

Academics at The German Institute of Contemporary History (IFZ) have been working on this heavily annotated version of the book, which contains over 3,700 comments analysing the original text.  According to the institute’s spokesperson Christian Hartmann, the annotations in the new version are “an attempt to destroy Hitler’s ideology completely.”