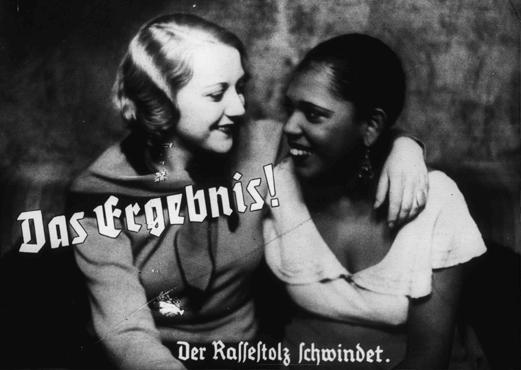 Nazi propaganda photo depicts friendship between an “Aryan” and a black woman. The caption states: “The result! A loss of racial pride.” Germany, prewar. — US Holocaust Memorial Museum

And while Jews were the primary target of Hitler’s murderous racial policies, there were many others targeted within Nazi Germany and in occupied Europe. Some, such as the Sinti and Roma peoples, are now frequently remembered, but there are still more victims  and many of them have not yet had their stories told.

In particular, the black victims of Nazi Germany are hardly ever remembered, much less mentioned. But their stories provide powerful lessons to the extent and nature of Nazi oppression; the world needs to remember and to learn from their stories.

When Hitler first achieved real power in Germany in 1933, thousands of people of African descent lived there. It’s not precisely known how many thousands, because a comprehensive census of their numbers had never been taken. Estimates vary; most of these people were emigrants from Germany’s former African colonies that were lost after the First World War.

Many of them were part of a large community of emigrants who lived side-by said with, and even intermarried with white Germans. Some of them were Communists, and some were members of the few anti-racism organizations in Germany at the time.

But when the Nazis came to power, one of the first things they did was to systematically repress black Germans.

The Nature of the Beast

The laws passed in 1935, known as the Nuremberg Laws, removed German citizenship from of Germany’s Jews, and forbade them from marrying or even having sexual intercourse with Hitler’s ‘ideal’ ethnic Germans. The Nazis even murdered some black Germans in the early 1930s.

These laws became harsher as time went on, and they were widely used against Jews. They soon expanded to cover all “alien” peoples, including gypsies and blacks living in Germany. Passports given to African Germans listed them now as “stateless Negroes”. The path to citizenship, already difficult, was now closed forever. Many black children in the Rhineland were forcibly sterilized.

By 1941 all black children were banned from German public schools, though racism had grown pervasive long before this. No blacks were admitted into any institutions of higher learning, and they were systematically forced out of nearly every career or job in which they worked. Most were eventually relegated to hard labor, and then often to the concentration camps.

The world should learn about the persecution of black Germans and recognize their suffering.