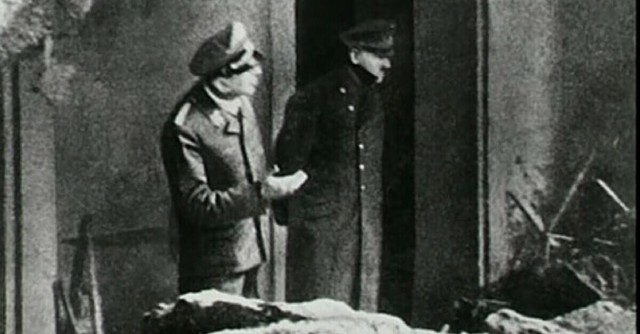 A new documentary called The Day Hitler Died contains never-before-seen interviews with those who surrounded Hitler during his final days.

When World War Two came to an end, the Allies were still unsure as to whether or not Hitler was definitely dead. Even though reports of his suicide had spread, Soviet forces claimed that he had fled Berlin. The Soviets were convinced the Nazi leader was still alive.

In 1947, the Nuremberg trials attempted to find out once and for all whether Hitler was dead or alive. Judge and US Navy lawyer Michael Musmanno was in charge of the investigation. It two years he interviewed more than 100 people throughout Germany, many of whom were surviving members of Hitler’s inner circle and some who were with him in the final days of the war in his Berlin bunker.

In 1948, Musmanno decided to capture some of these interviews on camera. He had collected a lot of wartime memorabilia that was donated to Pittsburgh’s Duquesne University when he died in 1968. Included in the donation were the films Musmanno made of the interviews. In 2007, all of the interviews were transferred into digital format, providing never-before-seen footage of the eyewitness accounts of Hitler’s final days.

The documentary The Day Hitler Died includes a mix of actors re-enacting Hitler’s final days and the actual interviews conducted by Musmanno in 1948, providing the most detailed analysis of Hitler’s death.

The documentary begins the story on the 20th of April 1945. Hitler was already held up in his Berlin bunker and that day emerged in public for a final time to award his last Iron Crosses to Nazi soldiers for their role in defending Berlin against the advancing Red Army. Actual footage from the scene shows Hitler shaking the boys’ hands and congratulating them.

Just a week before, US President Franklin D. Roosevelt had died, encouraging Hitler delusions that he would win the war. One of Hitler’s close aides, Baron von Loringhoven, was interviewed by Musmanno and said that no one dared to suggest to Hitler that the Nazis were being defeated.

Hitler held onto hope until the end, anticipating that the Germans would develop a secret weapon and that there would be much dissension among the Allies. However, Hitler’s secretary, Miss Traudl, says that as the Red Army got closer and closer to the centre of Berlin, talk of suicide began. She says that Hitler made plans to take both poisons and shoot himself so that there could be no room for error.

The US finally declared Hitler officially dead 11 years after the war had ended in 1956.

The documentary The Day Hitler Died aired on 16th November 2015 on the Smithsonian Channel.