Leadership is on the minds of many people in my country as we await the result of a ballot to decide who will be the next prime minister. At the same time the suitability of the leader of the opposition is batted about ad nauseam by the media and other self-interested parties.

There seems to be no end to all this nonsense and the hope of someone with the genuine credentials to do the job stepping forward remains as forlorn as ever.

Having the ability to take decisive leadership during a crisis can mark out a politician as being a giant or a minnow and sometimes there is a fine line between the two. The symbolism of it can also linger. A quick glance at the reverse of a Bank of England five pound note will reveal the scowling features of Winston Churchill but not the man who for so long seemed to be his nemesis; Arthur Neville Chamberlain.

This outstanding book by Tim Bouverie is about appeasement. It tells how the contentious policy crept in to British politics like a guilty cat who had eaten next door’s budgerigar. It became all pervading, because the prize – peace for their time, was so great and so treasured that some politicians of the 1930s were prepared to surrender almost anything to achieve it. Ever since 1939 the spectre of failure and the surrender of honour has hung over appeasement and Neville Chamberlain, in particular, like a poisoned cloud. He is unlikely to ever appear on the back of any banknotes.

But hindsight is a wonderful thing and when discussing appeasement it is very easy to lose a grip on context. Mr Bouverie has a stranglehold on it from first to last in this book as he dissects events and reputations with apparent ease.

Make no mistake, there is nothing easy about this book, the slow-motion car crash element to the history is painful to endure at times, but I direct you to my earlier point at this juncture.

So, let us look at the context:

Britain was an imperial power experiencing steady decline. She was broke and, in many ways, broken by the Great War; by the debt, by the cost in lives and the failure to shake off the nightmare of the war to end all wars. The country was in abject need of social change and something like a New Deal, but those things were largely out of reach.

The old order were still firmly in control, but while there had been no revolution as seen in Russia and Germany or the chaotic revolving door of French politics, one thing most people could agree on, whether they were a clerk or a duke, was that there should be no more war.

Then came Adolf Hitler. Here was a man with vengeance and conquest at the centre of his ambitions. He never ever believed in peace or reconciliation. He only ever wanted war. There is an argument that many democrats feared and misunderstood him.

They tried to treat with him, to patronise him. But they did not reckon on his immense willpower and sense of purpose. They were naïve in their dealings with him and his supporters and they were swept away on the tide of his rise to power.

Chamberlain and his supporters appear to have entertained few illusions about the danger posed by the Nazis, but while they were cautious, they based all their dealings on the bedrock of their understanding of the order of things – the conventions of diplomacy and so on. But Hitler tore up the rule book, leaving them wrong footed; always having to react rather than be proactive.

Having reclaimed the Rhineland and smothered Austria by the spring of 1938, Hitler was ready for more. His plan to ratchet up tensions with the Czechs worked perfectly and the iniquities of the treaties imposed by the victors of the Great War were at the heart of things. The German Sudeten minority were the key. There is no doubt that influential British figures sympathised with their position and this helped weigh feelings against the Czech government.

But these feelings were not universal. Winston Churchill and his allies on the back benches were joined by the opposition in their antipathy towards negotiating with the Nazis. They could see that it was a precipice leading to much, much worse.

But Neville Chamberlain was not a man to be contradicted. He earnestly believed he could resolve the crisis through direct negotiation and he had the strength of will to go toe to toe with Adolf Hitler. His strength of purpose almost mirrors that of the German leader in this respect. Notions Chamberlain was somehow weak or scared are entirely incorrect except in the truth that he feared war itself because of what it would mean.

That his efforts were a complete failure in the long run should not detract from respecting his personal courage. His opponents in Westminster said he was wrong; they knew he was wrong, but the prize of peace was too much for Chamberlain.

He wanted it at any price. He was willing to surrender practically anything to achieve his goal, but he was not blind; he knew there would have to be a line in the sand somewhere. Poland was that line.

It is easy to be cynical about Neville Chamberlain. He was a strongman backed by a ruthless parliamentary and party machine that did not brook descent.

The prophets of doom – Churchill, Amery, Attlee, Greenwood and others were brushed aside until the penny dropped. There was no polite way to deal with Adolf Hitler. The Nazis mocked Chamberlain, but his warning that their actions would lead to destruction came true very quickly.

While his aims were unrealistic, his sincerity was absolute. But history judges everything. Appeasement was destined to fail and only war would resolve what diplomacy could not fix.

I’ve come to admire Chamberlain for his tenacity and his steadfast belief in his approach to dealing with dictators. But he was wrong.

Hitler and Mussolini could only be stopped by a show of strength. Britain was militarily weak and in need of a huge effort to rearm after years of neglect. A war in 1938 would have been a disaster for Britain and France, but there is no saying it would not have been as equally calamitous for the Third Reich.

Mr Bouverie’s analysis points to the lost opportunities to stand up to Nazi aggression and slap it down with a show of force. The consequences would be terrible.

I don’t claim to be a huge fan of Winston Churchill. He had his moments of towering inspiration, but there is much more to him than stirring speeches and v signs. Churchill was an arch imperialist who would not countenance the undoing of the British Empire.

He had little or no interest in domestic matters beyond standing up to anyone or anything that affected the status quo. But Churchill called Chamberlain and his friends out over appeasement and he was absolutely right to do so. He could see what was coming and he knew the only option was to fight.

For that he is remembered as one of the greatest leaders the United Kingdom will ever have, leaving Neville Chamberlain floundering as an abject failure. Nothing is so straight forward but the damage is done.
Chamberlain’s moment basking in the light was brief to say the least. The feeling of utter disappointment can be heard in his radio announcement on the day war was declared. He soldiered on as prime minister until the 10th May 1940, the day Hitler launched his attack in the West.

Churchill was standing in the wings awaiting his destiny. Neville Chamberlain died of stomach cancer on 9th November 1940.

There is much more to this stupendous book than I can cram into one of my missives. If you are looking to get a straightforward account of those times then this is the book for you. Tim Bouverie does not give any reputation a free pass.

The twists and turns of events are detailed with great style. I came away feeling even more sad for the appeasers than I was previously. They are a classic example of how wrong people can contrive to be. Their delusion seems breath-taking from this juncture, but our old mate hindsight rules the roost. This is warts and all stuff at its best but please don’t lose sight of the context. History is never just black and white. 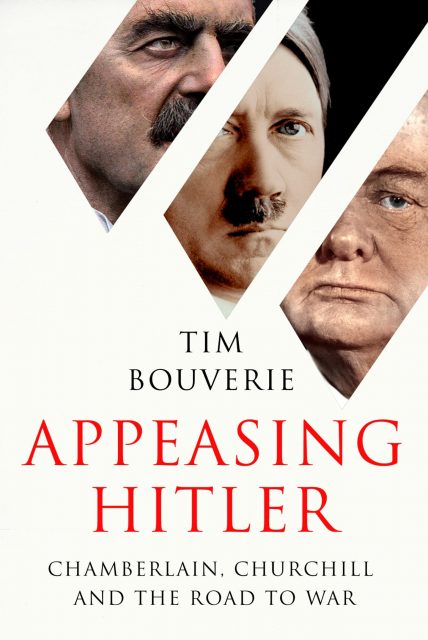 Another Article From Us: Third Reich’s Abandoned “Highway” For Stolen Gold