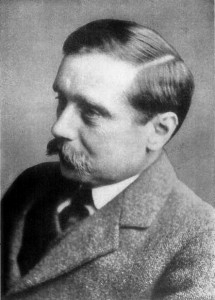 HG Wells the famous fiction writer was one of the first to write about an atomic bomb more than thirty years before the atomic bomb was detonated over Japan.

HG Wells is a writer well-known for his fantasy stories and he first dreamed up a uranium filled hand grenade that could explode and explode again and again and he wrote that it could be dropped from aircraft in order to hit its target. That was in his book ‘The World Set Free’ in 1914.

British Prime Minister Winston Churchill wrote of how he had read the works of HG Wells, as did Leo Szilard one of the physicists who brought the atomic bomb into reality.

Scientists began to experiment with the idea of the atomic bomb during the early 1900s when science was still identifying how the physical world is constructed.

It was a scientist called Rutherford who found that an atom with a tightly packed nucleus could be created and used like a spring being uncoiled.

HG Wells was enthralled by these kinds of new scientific discoveries and often dreamed up new developments that could be next. Winston Churchill even gave a nod to HG Wells when he wrote about using aircraft and tanks for combat, which turned in reality.

Churchill and Wells often met and talked about ideas and what scientists were developing. It was Churchill who wrote of how developments in technology might be dangerous to the human race, and even discussed how it could be the man’s own end.

It was in the early 1930s that British scientists managed to split the atom artificially in the lab, but at the time many didn’t believe it could produce energy, the BBC News reports.

But physicist Szilard believed that the split atom could achieve huge amounts of energy and referred to HG Wells as his inspiration. In a brain wave Szilard realized that a nuclear chain reaction could be possible.

At the same time that Szilard realized this, he also realized how devastating the possibility of such a reaction could be. With the Third Reich’s presence and influence growing in Germany it was a secret that had to be kept so that it wouldn’t get into the wrong hands. However, as it turned out, Nazi backed scientists were making their own progress and it wasn’t long until they too came to the same conclusion.

Szilard and Einstein even wrote to US President Roosevelt warning him that Germany was gathering stocks of uranium and how potentially dangerous this could be. In the end the German atomic bomb project came to naught.