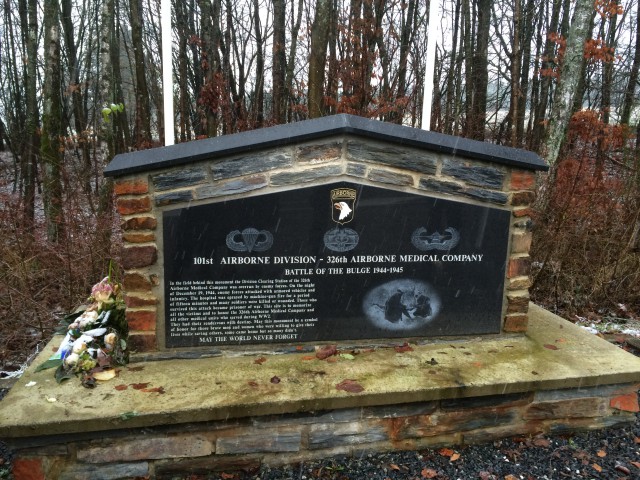 December 2009 – the unveiling of the monument of the 101st Airborne 326th Medical Company was a fact. Now several years later we noticed that the condition of the monument became very bad. The original nature stone on the bottom was changed for concrete. A change which unfortunately was necessary to secure the construction. Nevertheless the good intentions it is not what the monument should look like. But also the rest of the construction is getting in a worse condition every winter. We build it with the intention the monument would be there to stay for the next generation to remember all these brave men and women willing to sacrifice their lives saving others.

The monument is located at Barrière Hinck in Sainte Ode Belgium. In the field behind the monument the Division Clearing Station of the 326th Airborne Medical Company was overrun by enemy forces. On the night of December 19, 1944, enemy forces attacked with armored vehicles and infantry. The hospital was sprayed by machine-gun fire for a periode of 15 minutes. Many soldiers were killed or wounded. Those who survived this attack became prisoners of war.

The monument is build to memorize all the victims and to honor the 326th Airborne Medical Company. They had their rendezvous with destiny. We want this monument to stay a symbol of honor to those brave men and women.
Therefor it is very much necessary that this monument will be restored in it’s original state and make the construction stronger so it will stand steady with dignity for many many years so it will stay to tell the story and make sure that the world may never forget.

So participate in this project to restore this monument. How? We need money of course so please donate or/you can buy beautiful items all profits will be used for restoring this monument. Share this event to reach all of them who feel WWII history, and in this case the 326th Airborne Medical Company is worth to be remembered.

If we are able to raise more money than we need to realize this project we will use it to repair other monuments which are also damaged by people or nature. Unfortunately in Europe several monuments are damaged by people, like the monument at Bois Jacques. We build a number of monuments during the last years. The construction is cost fully but the maintenance too. When the maintenance is not covered by the government it will come down of the shoulders of the people  who took the initiative to build it in the first place. Maybe this fundraising could be a start to help all these wonderful personal initiatives to keep their projects in good condition so these will there to stay to keep the memory alive. We think that we owe this to all great men and women who are willing to sacrifice their lives for our freedom. THANK YOU FOR YOUR SUPPORT !!!!