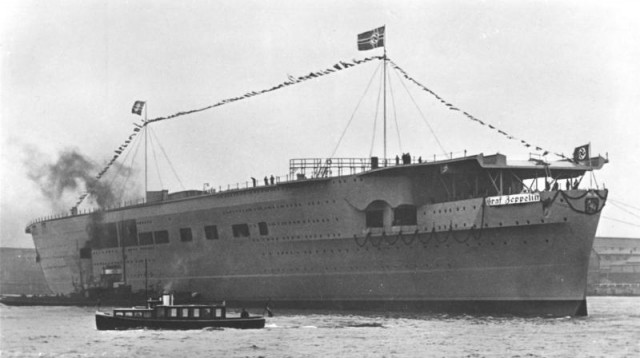 The Nazis having their own aircraft carrier is a scarcely known story but that didn’t mean it did not occur. Here’s the account of the Third Reich’s sole aircraft carrier — the Nazi naval vessel that never was.

The Nazis were not bent on having their own aircraft carrier during the Second World War for these reasons — the Kriegsmarine was not sold out on the naval vessel’s usefulness in the war, Hitler wasn’t fond of having one and Goering, the Luftwaffe’s commander-in-chief, was so possessive of his command over Nazi Germany’s warplanes he did all that he could to stymie Lord Raeder’s plan of building four aircraft carriers for the Third Reich. 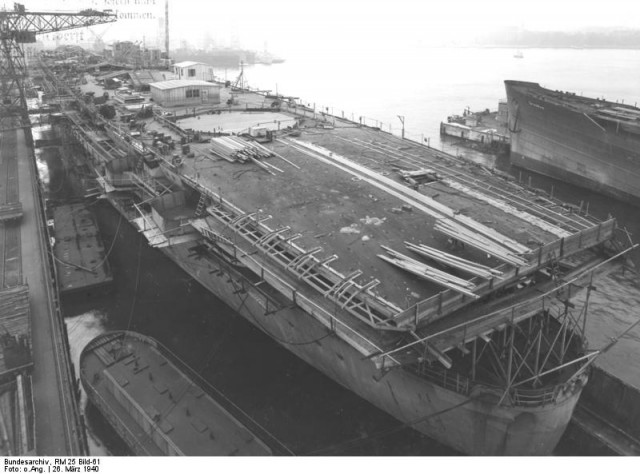 However, Hitler did express, in a plan he announced in 1935, that he wanted aircraft carriers to be part of his navy. By the time 1936 rolled in, two keels were already laid down and by 1938, Grand Admiral Erich Raeder presented his grand Plan Z. His idea was to produce a total of four completed  aircraft carriers in 1945. But his plan was scaled back to just two in 1939. 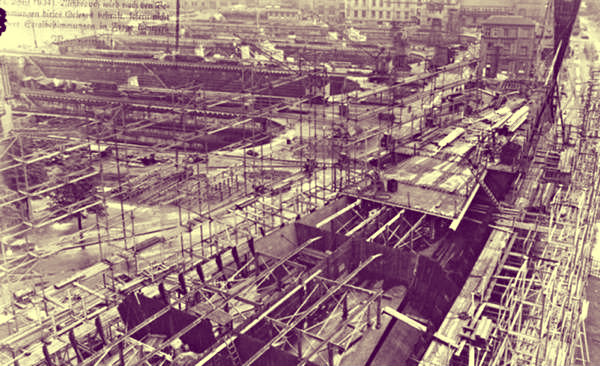 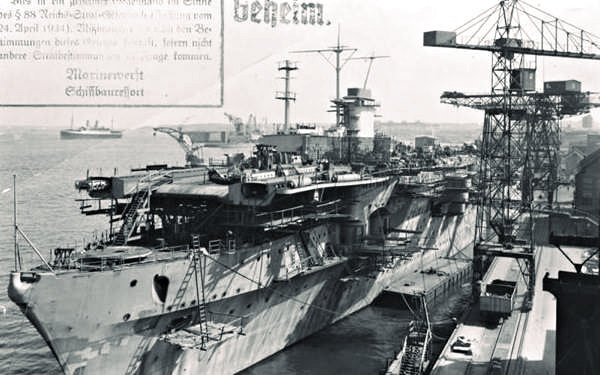 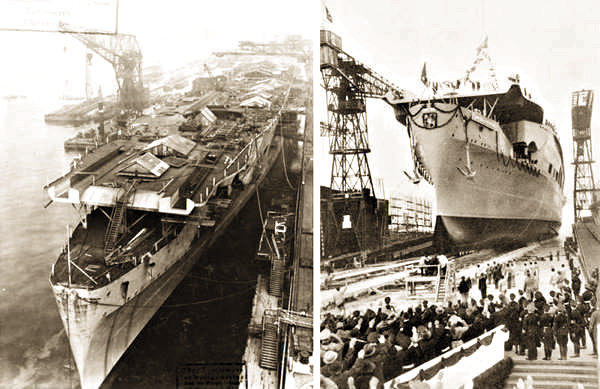 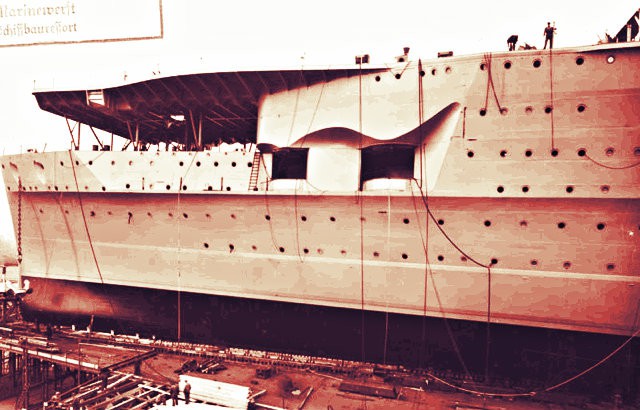 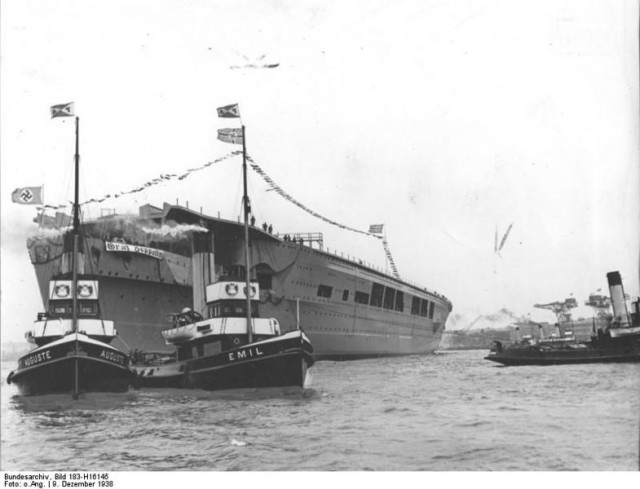 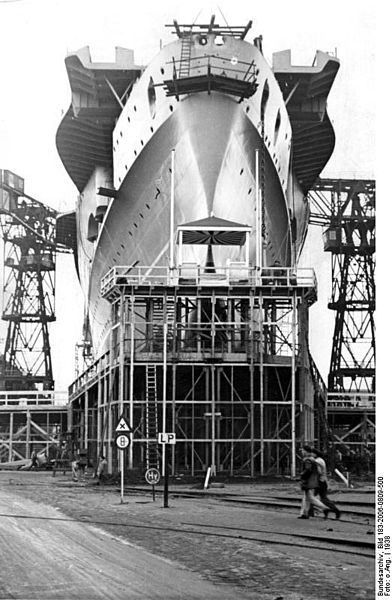 As it was Naval policy not to give a ship a name until it was completed and launched, the first laid down aircraft carrier was just designated the label Aircraft Carrier A. Eventually, it was named Graf Zeppelin upon her launching in 1938. On the other hand, the second ship, Aircraft Carrier B, was never launched.

May 1941 — Grand Admiral Raeder informed Hitler that the Graf Zeppelin, being 85 percent complete at that time, would finally be finished the following year. However, Luftwaffe General Herman Goering offered no help saying that he wouldn’t be able to supply the Navy with warplanes for the aircraft carrier until the end of 1944.

Because of this, the building of Aircraft Carrier B was abandoned and eventually, it was broken up.

By 1943, Hitler had become so uninterested in anything Naval it frustrated Raeder. The Grand Admiral asked to be relieved which Hitler accommodated. The German dictator replaced him with Karl Donitz, the Submarine chief.

Donitz had little interest with the finished aircraft carrier and focused solely on his beloved U-boats. And so, the Graf Zeppelin, like Aircraft Carrier B, was abandoned altogether. She was already 95 percent complete at that time. 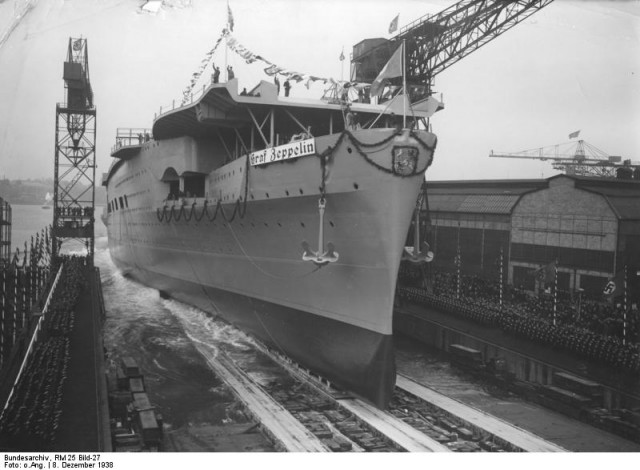 The almost completed aircraft carrier was stripped off of her armament and she was sent off to Norway for coastal battery use.

When World War Two ended in 1945, on April 25 to be exact, the aircraft carrier was scuttled in the shallow waters of Stettin in Poland. This step was done to make sure that Graf Zeppelin would not end up in Russia’s hands.

But end up she did in their hands!

The Graf Zeppelin should be destroyed or scuttled into deep waters as stipulated by the Allied Tripartite Commission. Nevertheless, the Russians had other things in mind for the vessel. So, in their decision to repair what might have been their enemy’s only aircraft carriers, they refloated her on March of 1946 and she was towed from Poland to Leningrad.

Further investigations in Soviet archives revealed that after reaching Leningrad, the Graf Zeppelin was given the designation PO-101 [floating base number 101] after she was unloaded. The Russians initially wanted to repair her there as they couldn’t do so in Stettin since all the repair facilities within the Polish city had been destroyed during the war.

But then this didn’t happen and after sometime, the German aircraft carrier was towed back to the Polish coast. 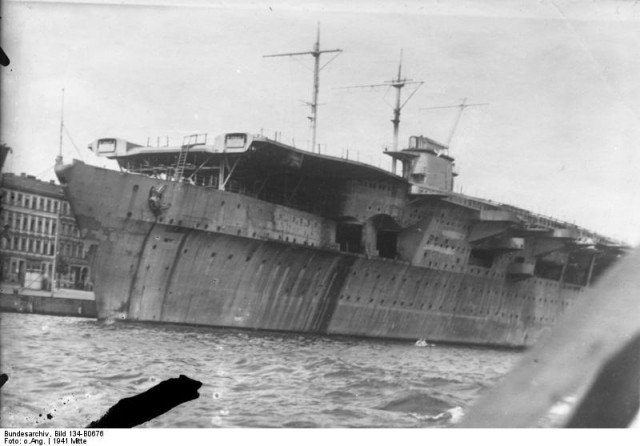 1947 saw the Graf Zeppelin becoming a practice target for Soviet warplanes and Naval ships. 24 bombs and projectiles later, she was still afloat. Eventually, two torpedoes finished her off and sent her down her watery grave.

For many years, nobody knew the actual sinking position of the aircraft carrier. It wasn’t until almost six decades later – in 2006 – that her wreckage was discovered underwater by Petrobaltic.

The Polish Oil Company ship found a wreck just close to the port of Leba which was about 265 meters in length. Further investigations by the the Polish Navy survey ship ORP Arctowski on July 27 that same year confirmed the find — it was, indeed, the Graf Zeppelin. She was sitting 264 feet below the water surface.

The Aircraft Carrier that Never Was

What started as a grand plan of the Third Reich’s Grand Admiral was left at just that. Nazi Germany was never able to produce a completed aircraft carrier during the Second World War.

The Graf Zeppelin, what could have been Nazi Germany’s only aircraft carrier, was never commissioned and ended up being used as a means for practice by its builder’s previous enemy — an unfortunate ending for what was once part of a majestic scheme.

All images courtesy of the Bundesarchiv