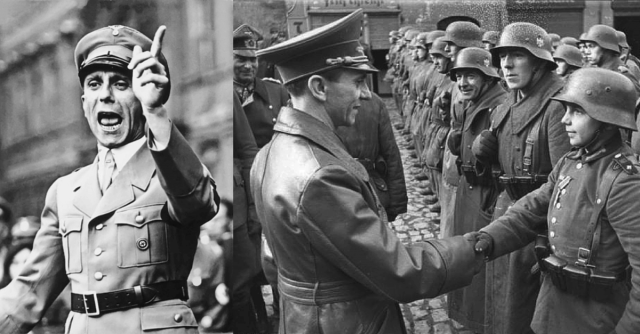 It has been revealed that the descendants of the one of the most trusted associate of Adolf Hitler, Josef Goebbels are living the ‘Royal’ lives as secret billionaires. Most of the wealth they are enjoying are actually forged during the Second World War, while in service of the Third Reich.

With a strong Art and Media background, Josef Goebbels grew closer to Adolf Hitler in the years leading up to his rise to the power. Goebbels played a crucial role in formulating a big chunk of Nazi propaganda before the establishment of the Reich. When Hitler eventually became the ‘so called’ Fuhrer of the German nation, he appointed Josef as the Chief Minister of the Nazi Propaganda. His job description was as wide and complex as were the ambitions of Adolf Hitler. In the last days of the war, when Adolf Hitler shot himself in the Fuhrerbunker, Goebbels shortly served as the Chancellor of Germany. His appointment was very short-lived as he killed himself along with his wife Magda and six children.

Magda had a son, Harald Quandt from her previous husband, who was captured by the British and was kept in a POW’s camp at the Libyan port city of Benghazi. He received a letter from his mother a few weeks after her suicide in the Fuhrerbunker. In the letter Magda affirmed her faith on the German cause and urged Harald to uphold his national pride and integrity at all cost.

After his release from the prison, Harald teamed up with his half-brother Herbert from father Guenther Quandt (Magda’s first husband), to further their father’s industrial empire.

Both Herbert and Harald passed away years ago, but Harald’s four daughters are one of the biggest billionaires of the world living a secret life, according to reports by Bloomberg Billionaire Index.

Most of the ‘billions’ that four Goebbels grandchildren are enjoying comes from the wealth generated by the industrial empire of Guenther Quandt who rose to become a leading character in the third Reich in late 30’s and during the WWII. Quandt joined the Nazi party in 1933 and quickly became a member of Hitler’s very close associates. Quandt’s vast industrial complexes supplied war materials to Nazis including light and heavy firearms, ammunition, along with a variety of anti aircraft missiles. Quandt family’s factories were even used by the Nazis as the prison camps for the POW’s and some were even among the biggest concentration camps, the Bloomberg Business reports.

One of the reason that experts suggest operates behind the low profile of the Goebbels sisters is the fact that their wealth could easily be traced back to the Nazi serving, weapon generating, concentration camps. This is the part of Goebbels legacy that four sisters cannot get rid off and are trying to live with it in their own way.