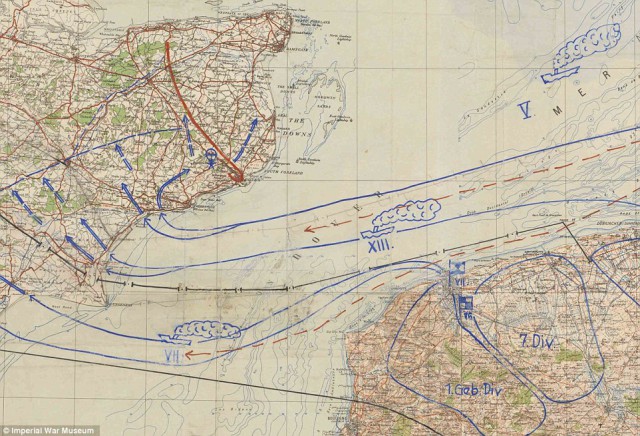 A never before published set of German maps have revealed some interesting facts about the Nazi plans to cross the English Channel and invade Britain.

Hitler’s plan of breaking through a country’s defences and taking over its nervous system was not only very robust and effective, it worked every time. The Second World War was not something that just happened for Hitler; he rather planned it for years and lived the dream of dominating the European continent, day and night before the War broke out. Hitler’s plan was very simple, first Luftwaffe would wipe out all potential obstacles and then the land invasion moved in to annihilate any opposition left.

The maps featured in an exhibition in Imperial War Museum North named Horrible Histories: Blitzed Brits are attracting a number of audiences due to their various interesting features. After Hitler had made his plans for the invasion of Britain very clear to its command, a number of officers in the HQ started making graphic plans for the invasion routes. These maps contain the hand drawings of a German officer showing potential routes to attack Britain from Dover and Dorset. It also shows sketches of paratroopers (rather a single paratrooper) landing over Kent area.

The curator of the Horrible Histories: Blitzed Brits Ian Kikuchi said that these maps are creative and artistic and present a lighter side of the stereotypical hard-core Nazi officers. The drawings on the maps offer a unique insight into the human side of the Nazi officers since the drawings are merely doodles. The warships shown in the drawings have a long trail of smoke coming out from them; it’s not something one would expect from a Nazi invasion planning officer.

Operation Sealion was Hitler’s last big obstacle to own the whole of Europe since Britain was the only country standing between him and the total dominance of Europe. The Fuhrer signed the official document authorizing the Operation Sealion in June of 1940. However Hitler met his match in the Battle of Britain when Royal Air Force defended its territory with unmatched bravery and paramount professionalism. Nazis dubbed August 13th, the first day of Battle of Britain, ‘The Eagle Day’ primarily because thousands of Luftwaffe tried to infiltrate British skies, the Mail Online reports.

The resistance was unexpected and robust; RAF’s Hurricanes and Spitfires fought gallantly and pushed Luftwaffe where they came from. Not for a single day did RAF allow Luftwaffe to claim superiority over British skies. Despite the fact that these maps depict a very casual approach towards a certain land invasion of Britain, RAF’s response and sacrifices to win the Battle of Britain successfully restricted Hitler’s dream of executing Sealion on the papers.