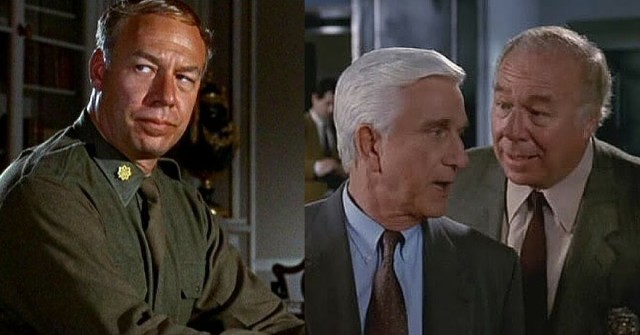 Tall, muscular and fair-haired, George Harris Kennedy, Jr. was born into a show business family on the 18th February 1925 in New York. He died at the age of 91 on the 28th of February 2016 in Boise, Idaho, as a result of heart complications.

His father, George Harris Kennedy, was a musical composer and conductor with Proctor’s Theatre in Manhattan and his mother, Helen (nee Kieselbach) was a ballerina with “Le Ballet Classique”.   Coming from a show business family it was not surprising that he made his stage debut at an early age and at just two years old, he toddled onto the boards as a member of the travelling show, “Bringing Up Father.”

After he graduated from High School in 1943 he joined the U.S. Army, with the ambition to become a pilot. This was not to be and he ended up in the infantry and served under General George Patton. He attained the rank of Captain and had a distinguished service record during the war earning two Bronze Stars and four rows of combat and service ribbons.

At the end of the war an unusual medical problem left him in traction for almost two years. He had a back injury that resulted in his left leg being shorter than his right by three inches. In the mid-1950’s he re-enlisted into the Army and was heavily involved in the Armed Forces Radio and Television.

This involvement with television earned him a technical consultancy position on the film “Sgt. Bilko”. Working on this film whetted his appetite for acting, but the problem with his leg was a hindrance. Fortunately, he was referred to a good chiropractor that sorted his problem.

He had left the Army in 1959 with 15 years’ service and once in Hollywood his rugged looks landed him several roles playing tough men as a foil to the male stars of the day. In an interview in 1971 Kennedy wryly commented, “The big guys were on TV and they needed big lumps to beat up. All I had to do was show up on the set, and I got beaten up”.

With his Army service he was perfect for some war films. He played Colonel Gregory in the 1965 film, In Harm’s Way. This film starred John Wayne and Kirk Douglas and was a realistic look at the U.S. Navy at the time of Pearl Harbor and the start of World War II for America.

In 1967, he played Major Max Armbruster in The Dirty Dozen. This iconic film was about a group of twelve criminals recruited from military prisons to undertake a suicide mission into France to assassinate Germans commanders at a French chateau.

He was awarded an Oscar for his performance of Dragline in Cool Hand Luke in 1967. This was the story of a petty criminal, Luke, played by Paul Newman, who is sentenced to two years incarceration in a Florida prison. Kennedy’s character, Dragline, is the prison yard ‘heavy’ who reluctantly starts to admire Luke for his stubborn resistance to the cruel and unjust punishment meted out to him.

In 1978, he played General George S. Patton in The Brass Target a film based on the book The Algonquin Project by Frederick Nolan. The film was based on a true event, the death of General Patton in a car crash, but this story shows that his death was not accidental but a result of a conspiracy. The film is about the theft of German gold held at the Reichsbank en route to Frankfurt. Before the train carrying the gold reaches Frankfurt it is robbed and the MP’s guarding the train are killed.

With his imposing size and his innate acting ability, George Kennedy was a favorite with the casting directors and he starred in many films across a number of genres. He was at home in westerns as well as comedy and thrillers.

Kennedy was a loyal and patriotic American, unlike many of today’s Hollywood tinsel heroes. He had class and integrity which showed in the performances over many years.