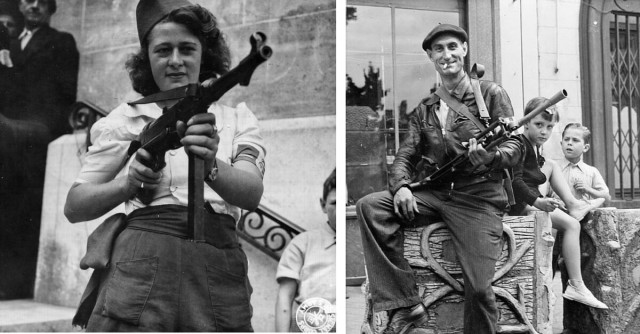 A veteran of the French resistance during World War Two has tells about the efforts to sabotage the Nazi occupation.

From 1940 to 1942, the first years of the German occupation of France, there was no systematically organised Résistance capable of coordinated fighting throughout France. Active opposition to the German and Vichy authorities was sporadic, and carried out only by a tiny and fragmented set of operatives.

Most French men and women put their faith in the Vichy government and its figurehead, Marshal Pétain, who continued to be widely regarded as the “savior” of France, opinions which persisted until their unpopular policies, and their collaboration with the foreign occupiers, became broadly apparent.

The earliest Résistance organisations had no contact with the western Allies, and received no material aid from London or anywhere else. Consequently, most focused on generating nationalist propaganda through the distribution of underground newspapers. Many of the major movements, such as Défense de la France, were centred around their newspapers.

Even after they became more intensively activist, propaganda and the cultivation of positive morale remained, until the very end of the war, their most important concerns.

The French resistance was not aligned to a single political party or societal group. Instead, it saw itself as a kind of military group. The congress of the resistance would take place on a regular basis and would consist of armed men from around 16 groups that operated throughout France. Representatives included those from Communist groups to Socialists and Conservatives, but they all had one thing in common – their loyalty laid with France and their leader, General de Gaulle.

Much of the resistance was focused on sabotage or confusing the German troops in their invasion of France. Local groups were organized and aligned to a regional framework so that there was an organized network of attacks and plans. It was foreseen that the resistance would also replace the German and Vichy-France authorities once they had been overthrown.  Collaboration with the Germans was limited.

One assignment saw masses of sugar supplies being blown up by the resistance on barges on canals headed to Germany. Abandoning the water to get the supplies to Germany, the Nazis loaded the sugar onto trains, after which the resistance had these derailed. It was then loaded onto lorries to be transported by road, but the resistance tampered with the lorry motors and they never left France.

The resistance became disciplined at operating under the radar of the Germans, yet the Germans also became adept at drawing out the resistance at any chance they could get.

General Eisenhower estimated the value of the Résistance to have been equal to ten to fifteen divisions at the time of the landings. Eisenhower’s statements are all the more credible since he based them on his GHQ’s formal analyses and published them only after the war, when propaganda was no longer a motive.

Historians still debate how effective the French Résistance was militarily, but the neutralization of the Maquis du Vercors alone involved the commitment of over 10,000 German troops within the theater, with several more thousands held in reserve, as the Allied invasion was advancing from Normandy.

It is estimated that FFI killed some 2,000 Germans, a low estimate based on the figures from June 1944 only. Estimates of the casualties among the Résistance are made harder by the dispersion of movements at least until D-Day, but credible estimates start from 8,000 dead in action, 25,000 shot and several tens of thousands deported, of whom 27,000 died in death camps.