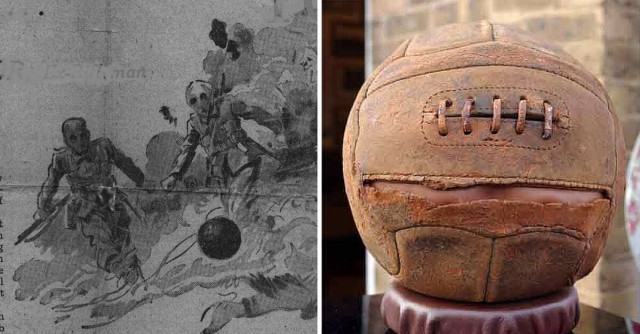 The age-old notion of shell shock or as it is euphemistically called the battle fatigue has always been most misunderstood phenomenon of modern warfare. Soldiers have always been utilizing variety of methods and techniques to overcome shell shock and to maintain focus during combat. Nowadays soldiers are given somewhat adequate training to cope with such phenomenon but during the First World War men were expected to deal with it individually.

On 25th of September 1915 during the famous Battle of Loos, a British Rifleman Frank Edwards of London Irish Rifles performed ‘a one of a kind’ action in the battlefield. He took his favorite football that he kept with him since the beginning of war, and threw it towards the enemy lines, with intention to score a goal in the German trenches. Edwards was shot during his audacious attempt, but luckily he survived and his football was recovered form the battlefield. Frank Edwards lived after the war in the London’s Twickenham area enjoying the title of ‘the footballer of the Loos’ throughout his life.

According to Historians, Edward’s action has many dimensions with respect to the nature of the combat and conditions in British trenches. Soldiers were expected to fight a seemingly never-ending war, and on top of that British commanders had made it pretty clear that no recreational item was allowed in the trench. If any such item was found in soldiers’ possession, he was severely penalized for his rebellious action. Edwards not only defied the authority he also helped his comrades cope with the excruciating battle conditions and killing stress.

Despite the fact the Edwards war ended after getting shot in the battle of Loos, his legacy lived on and his story spread among British soldiers like wildfire. A year after Edwards threw ball in the battlefield; Captain Billie Neville brought Edwards back to war by replicating his actions, this time in the Battle of Somme. Captain Neville used the tactic to help his soldiers focus while in the killing fields of Somme. Sadly Captain Neville was killed in the Somme, his body was found near the enemy lines and lying not far from his body were two footballs he threw in the battlefield, the Metro reports.

Frank Edwards lived in Twickenham area of London after the war and died in 1964 in Whitton. All through his life he received the respect and honor he deserved from his fellow countrymen. In May 2005, Royal Mail issued a special stamp commemorating The Football of Loos. There is also a Pub called Rifleman Pub named after Frank Edwards.