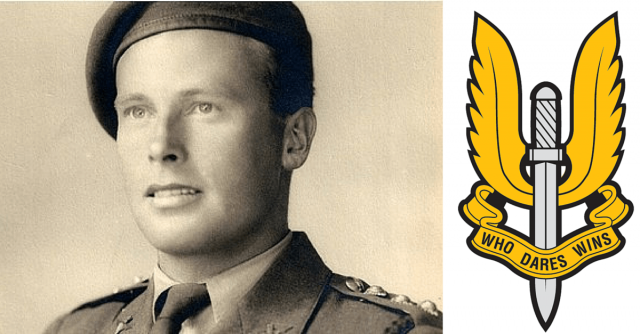 The first UK soldier to put his feet on French soil during the D-Day landings has died at the age of 95.

Lieutenant Norman Poole from the British Army’s SAS paratrooper regiment was dropped over France in phase one of the planned invasion.

The phased approach saw thousands of Allied paratroopers dropped behind enemy lines in France in order to infiltrate enemy positions further in land. Paratroopers began to be dropped over France at midnight on 6th June 1944.

Norman was dropped over the northern area of Cherbourg peninsula along with a carrier pigeon so that he could send messages back to the Allied commanders.

The paratrooper mission was codenamed Titanic IV. Norman and five other paratroopers were dropped in the Cherbourg peninsula.

While there was only six men in total they were dropped along with around 200 fake parachute dummies, which was planned to distract and confuse the Germans. The dummies were even fitted with recorded noises so that they sounded like they were opening fire.

It was only Norman’s carrier pigeon that survived and got home with a message, but it has been kept secret and no one knows its contents even to this day.

At the end of the first day of the D-Day invasion more than 150,000 invading troops had made their way onto the beaches at Normandy and had established positions along the coast line.

Because Norman and his five comrades were dropped further in land they were surrounded by German troops. They spent more than six weeks avoiding being captured, but were eventually imprisoned by the Nazis and held as prisoners of war.

Luckily with the Allied invasion of France, they did not have to spend long in prison and were liberated by Allied troops when they reached their prison camp.

Upon returning home to England, Norman received the Military Cross for his actions, courage and bravery behind enemy lines, The Herald reports.

When World War Two ended, Norman trained as a banker and worked his way up the career ladder to become a regional manager for NatWest in Bristol. He finally retired in 1980 and lived in Somerset in England’s south west until he died this year. His wife Elizabeth had already died four years earlier.

Norman’s daughters say that their father never talked about what happened during the war, and even on his death bed never revealed the message that the carrier pigeon took back to his SAS military commanders.