The Pacific War is often mistakenly seen as a conflict between America and the Japanese. In fact Australia played a very important role in the defeat of Japan. The Japanese Empire was a direct threat to Australia and many feared that they would invade the country. Japanese planes bombed the Australian city of Darwin, this was a considerable shock to the Australians.

While the city of Darwin recovered from the largest attack on Australian soil, fears of a Japanese invasion preoccupied the region. The Australians were involved in a bitter conflict with Japan in Papua New Guinea. Because of the threat of Japan, the Australian government was forced to seek the withdrawal of their armed forces from North Africa to protect the nation.

Separate from the armed conflict, Australian and Japanese forces both designed propaganda to create dissent among each other’s forces and strengthen their own resolve. Jared Archibald, of the Museum and Art Gallery of the Northern Territory, has recently curated 10 images from the museum’s archives evidencing both the Japanese and Australian sides of the propaganda war. While traditional warfare targets soldiers and military equipment, propaganda aims for the morale and mentality of both civilian and military personalities. 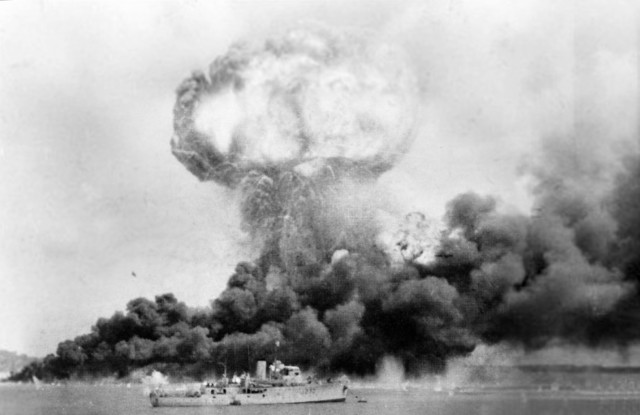 The Museum is correctly displaying images from the Australian and Japanese propaganda battle. Five of the images on display are of Australian origin and five of Japanese.

The Japanese images are extremely colorful depictions with some plays on words, while others showed American advances on Australian women while Australian soldiers were off fighting in the war. A few of the remaining Japanese images in the museum’s vaults, however, were deemed “pornographic,” said Archibald, too lewd for public display.

The Australian images, conversely, are black-and-white stills created by Australia’s wartime government propaganda specialists. The Australian images were somewhat more direct and reflected severe anti-Japanese sentiments prevalent in many Australian minds at the time. Sentiments of this nature toward an enemy of war are not uncommon.

While propaganda is commonly interpreted as a means to twist and warp the truth in an attempt to place doubt and hate in the minds of a targeted audience, it can also be used for good by reinforcing positive messages and inspiring people to take action. Archibald hopes his display will make viewers reflect on the nature of propaganda and its potential and allow them to understand how it can influence them and persuade them to hate and dislike other people.

The collection is being displayed at the Defence of Darwin Experience at East Point from February 19.